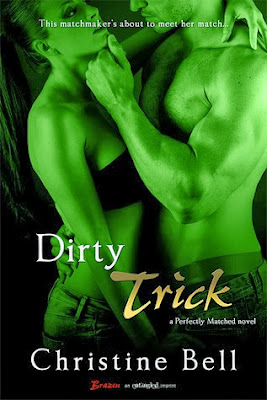 This matchmaker's about to meet her match...

Grace Love is lousy with men. She can spot a match for someone else a mile away, and her balls-on instincts are why her matchmaking business is thriving, but finding her own Prince Charming? The only guy who makes her sixth sense tingle is her playboy best friend, Trick, and no way is she risking their friendship, no matter how hot she knows the sex will be.

SWAT officer Trick Matthews is a patient guy, but Grace’s inability to see what’s right in front of her is grinding on his last nerve. Yeah, he blew his shot at breaking out of the friend zone when he tamped down the urge to lick her from head to toe the day they met, but he’s got a plan that’ll change her mind. Incognito at Salem's hottest Halloween party, he’ll show her exactly how good they could be…and that he’s the man for her.

Review:
Dirty Trick is a perfect Halloween treat for romance lovers! Chrisitne Bell has created a spicy friends to lovers romance with a super hot SWAT team hero and a down to earth heroine that anyone would want to be friends with and I enjoyed every minute of it.

Trick has always been a player but he is starting to think it is time to settle down and there is only one woman who he wants to claim - his best friend and neighbour Grace. They have been friends for over a year now and spend nearly every spare minute together but Grace hasn't noticed that he's changed his womanising ways and she has him parked firmly in the friends zone so Trick devises the perfect plan to show her how good things could be between them. With Halloween approaching he decides to don a disguise to seduce her at a costume party and prove what amazing chemistry they have. Grace has always had strong feelings about Trick, after being emotionally abused by her ex she is low on confidence and self esteem but Trick is the one man she feels close to and that she can trust 100%. She would never risk losing their friendship by acting on her attraction to him though, especially when she is certain she would never be able to keep the attention of someone so gorgeous.

I have to say from the moment Trick stepped onto the page in his SWAT uniform he had me swooning! What is it about a guy in uniform that turns so many girls knees to mush? Not only is he incredibly sexy but he is also a great guy, he's caring, protective, loving and he adores Grace. I loved seeing them spend time together as a couple but I also enjoyed seeing the incredible passion between them when Trick dons is catman disguise. I have to admit that I couldn't understand why Grace didn't recognise him but you just have to go with that. I also found myself getting a little annoyed with Trick for keeping the deception going on quite as long as he did but because you see things from his point of view you get a full look at his male logic and can understand why he does what he does. Grace was a sweet heroine and it was good to see her gain confidence with Trick's help, as much as I didn't agree with the way he went about things it did help bring her out of her shell and show her just how much her ex had messed with her head.

Dirty Trick is a sexy story and one that has some fantastic passionate encounters (the cinema scene was HAWT!), it's a quick read and one I'd highly recommend. I'm definitely going to have to start working my way through Christine Bell's back list!