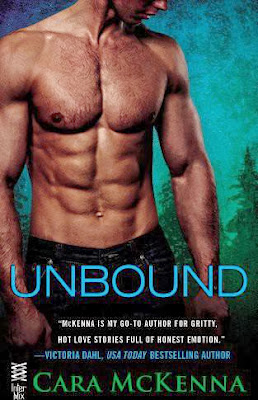 She set out to find herself, and discovered the darker side of desire.

Merry’s lost a lot recently—first her mother, then close to a hundred pounds. Feeling adrift, she strikes out in search of perspective. A three-week hike through the Scottish Highlands was supposed to challenge her new body and refocus her priorities, but when disaster strikes, she’s forced to seek refuge in the remote home of a brooding, handsome stranger . . .

Rob exiled himself to the Highlands years ago, desperate to escape his own self-destruction. Haunted by regrets, he avoids human contact at all costs…but when Merry turns up injured, he can’t very well run her off. And as he nurses her back to health, Rob can’t resist his guest’s sweet demeanor—or her flirtatious advances. The igniting passion between them rouses a secret appetite Rob has long struggled to keep hidden. But Merry craves nothing more than to help Rob surrender to his desires, and the journey draws the lovers into an entirely different kind of wilderness.

Review:
After her mother's death Merry set out to change her life, first by losing nearly 100 pounds and then by setting out on an adventure. Three weeks trekking across the Scottish Highlands might not be everyone's dream holiday but Merry is looking forward to getting away from it all and discovering just what her new body is capable of. When she is taken ill in the middle of nowhere she has no choice but to seek help at an isolated cottage. Rob left his entire life behind him to exile himself in Scotland, he has spent the last few years avoiding people and trying to put his past mistakes behind him but he can't exactly turn an injured woman away when there is nobody else who can help her. He reluctantly lets Merry stay with him while she recovers and quickly finds that his gruff and secretive nature isn't enough to keep her at arm's length. As Merry draws him further out of his shell Rob must decide whether he is ready to face the world again or whether to continue with his isolated and lonely existence.

Unbound is the first book I've read by Cara McKenna but considering it's one of my favourite reads of the year so far it definitely won't be the last! It takes a lot of skill for a writer to immerse me so fully into a story and to hold my attention for a whole book especially when you only really spend time with the two main characters but that's exactly what she did. I fell in love with both Merry and Rob and enjoyed every minute that I spent with them.

Merry has been through a lot but she has taken steps to change her life and become the woman she always knew she could be. Her weight loss has taken hard work and determination but she is proud of her achievements and disappointed with the reaction she gets from the people who are supposed to be her best friends. She refuses to take on their negativity though and sets out on a journey of self discovery hoping to reconnect with her mother's birth place and at the same time put her own past behind her. I found Merry was immediately a likeable character, she doesn't have the best self image but she is self aware enough to recognise why she feels that way and she wants to be comfortable and confident of her new image. Her journey across the Highlands has shown her just how capable she is and she is relishing the freedom from her normal day to day life and other people's expectations of her.

Rob is an extremely messed up character, he is ashamed of so many things that he did in his past and instead of facing up to his demons he has hidden himself away from the world and is letting life pass him by. It isn't until he starts to get to know Merry that he realises just how much he has been punishing himself but even when he understands that it doesn't make it easy to open up to her and let her in. Along with his tortured past Rob is also hiding a sexual kink that he has always been ashamed of, he may be attracted to Merry but he is worried his needs will be a turn off for her and is too afraid to share them with her. Rob was such an intriguing character, some of the things from his past should be a turn off but I found myself falling for him anyway. I'm not going to spoil things when it comes to his kink but I will say it was hot as hell seeing how happy Merry was to help him fulfil his fantasies!

Merry is such an open and accepting character and she really helps to bring Rob out of his shell. She challenges him to face up to his past and by doing that she helps him learn to live in the present. He starts to question everything and finally starts to deal with his demons rather than run from them. It was great to see how much progress Rob made and I enjoyed seeing Merry's confidence in herself and her own sexuality grow as she took on the role that Rob needed her to. This really is a case of opposites attract, Rob is an introvert who is shy, grumpy and would rather be on his own while Merry is the cheerful life and soul of the party who thrives on being around people. You might think that the two of them together would be a recipe for disaster but they fit together perfectly and both bring out the best in each other. It's been a long time since I loved characters quite as much as I adored these two and there were parts of both of them that I found incredibly easy to relate to.

Unbound is a fabulous novel, one that was much more emotional than I expected and that has huge amounts of depth. Rob is a flawed hero, one who has a habit of letting his past rule the present but his journey was all the more compelling because of that. Along with the emotional growth this story has some of the hottest sex scenes you'll ever come across and it has turned me into an instant Cara McKenna fan. I can't wait to start working my way through her back list and I can't recommend this highly enough to anyone who likes their contemporary romance a little on the kinky side!