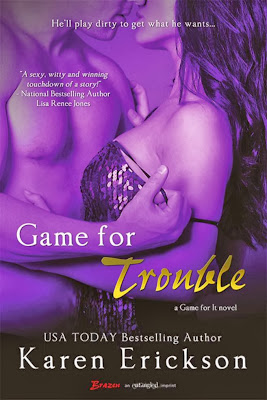 Willow Cavanaugh would be happy if she never saw Nick Hamilton again. Sure, they had a short-lived fling many years ago, but now he’s back and acting like he wants a second chance. But Willow knows he’s way too much of a playboy to want to settle down with one woman. Plus, she’s got her heart set on a piece of real estate for her catering business that it turns out Nick owns . . .

Nick may be at the top of his game, but all he really seems to want is Willow. When he offers to sell Willow his commercial space if she agrees to a series of dates with him, jumping back into bed after each one seems like an inevitability. But what about when real feelings get involved?

Game for It Series:
Game for Marriage
Game for Trouble
Further titles & release dates to be confirmed

Review:
I absolutely loved Game for Marriage when I read it earlier this year so I couldn't wait to get my hands on the sequel Game for Trouble. I had high hopes for Nick and Willow's story and I'm happy to say that Karen Erickson has created another sexy story with great characters. I don't think I enjoyed it quite as much as the first book but it's still a solid romance and one that I'd be happy to recommend.

Nick and Willow have history, they had a very hot fling one summer several years ago but Nick broke Willow's heart when he walked away from her. They hadn't seen each other for years but now that Willow's best friend Sheridan has married Nick's team mate Jared they can't seem to get away from each other. Nick has always regretted walking away from Willow, in fact it was something he never really wanted to do in the first place, and now he is determined to claim the only woman he has ever loved. Willow is still attracted to Nick but she knows how easy it would be to fall back in love with him and she is terrified of having her heart broken all over again. Can Nick convince her that if she gives him her heart again he'll treasure it forever?

I loved Nick, like Jared he is cocky and arrogant but he manages to pull it off without becoming annoying. He is confident with his looks and body and has never had any trouble getting women to go out with him but Willow is different, she's the only one he cares about and the only one who seems immune to his charms. He is desperate to win her around but he has no idea how to go about it. I enjoyed the scenes where he was asking Jared and Sheridan for advice, it was nice to catch up with the previous couple and their insights into Nick and Willow's relationship were amusing. I loved how persistent Nick was, he shows over and over again how much he cares for Willow. He wants her in his bed but he also wants to look out for her and protect her.

I'm going to be honest and say I didn't like Willow as much as I expected to, I could understand why she was so scared to trust Nick again and I didn't have a problem with that in the beginning. He needed to work at gaining her trust and I was happy with that, I also liked the fact that she was so independent and wanted to make her own way in the world rather than live off of her father's money. What I didn't like was the fact that even after she admitted to herself that she loved Nick and that he loved her she wasn't willing to apologise for the mistakes she'd made. Nick worked his butt off for the whole book to win her around and I really wanted some kind of grand gesture from her towards the end to prove that she was worthy of his attention but once again it was Nick who had to come to her after she'd pushed him away. I loved the actions Nick took and they definitely made me swoon but I'd have liked more to have come from Willow's direction. That's very much a personal preference though and wasn't enough to stop me from enjoying the story.

Their chemistry was off the charts hot, once they gave in to their attraction there was no stopping them which fantastic. They literally can't keep their hands off each other which lead to a very hot public encounter! Game for Trouble was a fab story and I'm looking forward to reading more from Karen Erickson in the future.