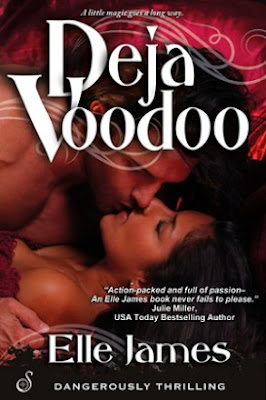 Alexandra Belle Boyette is closing in on the big 3-0 and her mama has made it her mission to marry her off. In the tiny parish of Bayou Miste, deep in the Louisiana swamps, finding suitable hubby material can be a challenge—and Alex would rather not rely on magical spells to do the trick. But there is a sexy new man in town who might fit the bill . . .

Ed Marceaux is in Bayou Miste to safeguard a key witness to a Louisiana Mafia murder. He must keep an eye out for suspicious characters—but the place seems to be full of them! What could be stranger than a woman dressed in a sexy nightgown chasing a naked man down the street? The enchantingly gorgeous Alex Boyette certainly makes it worth his while to find out . . .

Review:
Deja Voodoo is the third book in Elle James's Cajun Magic series and was just as much fun to read as the previous books. These stories don't need to be read in order as they all feature a different main couple but you will find familiar characters re-appearing throughout the series and in this case our heroine Alex is the sister of Ben, the hero from Voodoo for Two. This is a really light hearted series full of hunky Cajun heroes and just a hint of magic but I think the thing I enjoy most about it is the Bayou setting.

As the oldest girl in the Boyette clan Alex has spent years taking care of her younger siblings so the last thing she wants is to get married and start having children of her own. She's happy to put her energy into her business and wants to live her own life for a change but her mother has other ideas and is constantly trying to set her up with eligible bachelors. Ed is a colleague of her brother Ben and he is in the Bayou to protect a witness for a murder trial. He has a job to do and isn't looking for any entanglements but everything about Alex gets his blood pumping and she isn't easy to stay away from. Throw in a magic spell gone awry and things are about to get interesting.

I love the Boyette family, they are such a huge family and although they have their arguments just like anyone else they're really close knit and protective of each other. As one of the oldest Alex is like a second mother to the younger ones and they all rely on her for advice and assistance. She's never really had the chance to go off and do her own thing but she doesn't resent that, she loves her family and would do anything for them but she's now ready to spread her wings and start to live a little. Ed is a great guy, he is protective and caring but he has a playful side that Alex brings out in him and they fit together really well. It doesn't help that Ed isn't able to come clean with Alex about why he is in town though, he is in disguise as a tourist so that people can't track down his witness and that isn't easy for him but they have something special and he is willing to work for it. I enjoyed the romance between these two, they were very sweet together.

There is a good amount of action to add some tension to the story and I have to tell you how much I loved the side story with Alex's dog Spot - I can't say more without giving spoilers but it was hilarious! Deja Voodoo was a nice addition to the series, I'm not sure if Elle James has more stories planned but if she does they'll definitely be on my wish list.