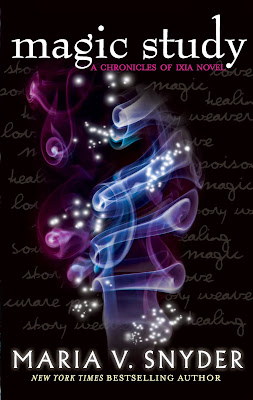 Discovering her fate could prove deadly . . .

Yelena Zaltana has been found guilty of possessing magical powers. The Code of Behaviour that rules the land of Ixia states she must be executed. Escape is her only hope.

But when the freedom Yelena has fought for is once more in jeopardy, she must use her magic to survive.

With only one year to prove herself, Yelena's future is uncertain and when magic is involved one mistake could mean sudden death.

Review:
I was such a huge fan of Poison Study that I couldn't wait to dive straight into Magic Study to continue following Yelena's story. I had high expectations and once again Maria V. Snyder smashed them with this incredible follow up, she has seriously become one of my favourite authors and I can't wait to carry on reading this series. I'm going to assume that anyone reading this review will have already read Poison Study so there may be spoilers for that book but it will be spoiler free for Magic Study. If you haven't started the series yet then stop reading this review right now and go grab a copy of Poison Study - buy it or borrow it from the a friend or the library but just get hold of a copy ASAP and start reading immediately, you won't regret it!

Now that Yelena's secret has been discovered and the Commander knows that she is a magician she has an execution order hanging over her head and staying in Ixia would mean certain death. Her only hope is to escape to Sitia where, with the help of Irys, she can not only find her long lost family but also begin her magical training. It isn't easy to leave Valek and her friends behind to face the unknown but Yelena knows she needs to learn to control her magic before it destroys her and she isn't one to turn away from a challenge. Meeting her family isn't easy though, her parents are delighted to have her back in their lives but she is wary of them and finds their affections stifling while her brother, Leif, seems to hate her on sight and she really doesn't understand why. Yelena must try to find a place for herself in Sitia but it is hard to know who to trust, especially when everyone seems to have their own reason to get close to her.

I loved getting to see how different Sitia is to Ixia, while Ixia is much more ordered and controlled it is also better at providing for it's citizens. Sitia on the other hand is brighter, more colourful and chaotic, there are less rules but for the first time ever Yelena sees beggars and realises that some people don't even have enough food to survive. Both cultures have positives and negatives and Yelena starts to realise that perhaps Ixia isn't as bad as she originally thought it was. I think my favourite part of Sitia was the Zaltana's home in the jungle though, I loved their treetop hideaway and it would be a wonderful place to visit. For the first time Yelena has a family who cares about her and she isn't quite sure how to deal with their affection, she has been on her own for so long that she doesn't find it easy to trust or to let anyone in and she is confused by the way her family instantly accept her as one of their own. Although she doesn't understand why Leif hates her so much she probably understands his suspicious reaction more than she does her parent's open acceptance and love.

Yelena has done a lot of growing up and her reaction to fear is no longer to run away, now she is much more prepared to fight to protect herself and those she cares about. It was fantastic to see her learning to use her magical abilities but I'm glad she didn't start to just rely on her magic to get her out of difficult situations, she is still more than capable of physically kicking butt thanks to the training she had in Ixia. Although I enjoyed watching her make new friends and allies I'll admit that I missed Ari and Janco, their banter was one of my favourite things about the first book so it wasn't quite the same without them. Luckily they have more of a role in the second part of the story and it was great to see them both again. I'd also missed Valek in the beginning, I fell for him big time in Poison Study and missed the romance between him and Yelena, thankfully that was also much more present and just as swoonworthy as ever later on in the book. I love the fact that Valek doesn't try to take over Yelena's life, he knows she is where she needs to be and he also knows that she can protect herself. He always has her back but doesn't try to stop her from fighting her own battles.

Magic Study was every bit as addictive as it's predecessor, the plot is fast paced, well written and full of intrigue and betrayal. There are plenty of plot twists to keep you on your toes and we are introduced to some fabulous new characters to go along with those we already know and love. If you enjoyed Poison Study you're going to love this one just as much if not more!