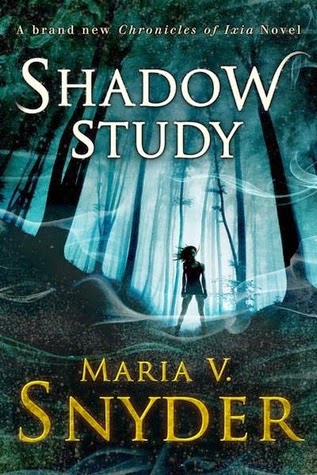 Yelena Zaltana is back and facing her biggest battle.

When Yelena was a poison taster, her life was simpler. She survived to play a vital role in the balance of power between rival countries Ixia and Sitia.

Now she uses her magic to keep the peace in both lands - and protect her relationship with Valek.

Yet dissent is rising. Valek's job - and life - are in danger. And Yelena's magic has been compromised.

Now she faces her toughest challenge - uncover and defeat her hidden enemies without the help of her powers . . .

Review:
I'm a huge fan of Maria V. Snyder, I was late to the party when it came to the Chronicles of Ixia books but I absolutely LOVE the Study trilogy and Yelena and Valek are still one of my favourite fictional couples so I can't tell you how excited I was to find out they were going to be the main characters in this new series. Although I enjoyed the Glass trilogy and would recommend reading the Chronicles of Ixia series in order (start with the Study trilogy, then the Glass trilogy and finally the new Soulfinders trilogy that starts with Shadow Study) I had missed Yelena and Valek as the main characters and was looking forward to them taking a central role again. Better still, Shadow Study finally gives us a chance to see things from Valek's point of view as he is one of the story's narrators alongside both Yelena and Janco.

Shadow Study was one of my most anticipated books of the year and it more than lived up to expectations. There is just so much to love about these characters and this world and I loved getting the chance to see inside Valek's head and the chance to learn more about his childhood and his assassin training. Did you ever wonder how he ended up working for the Commander or why he wanted to kill the king of Ixia? Did you want to know who taught him about poisons and how he became so skilled with a blade? You'll get the answers to those questions and so many more, Valek has always been a bit of a mystery so it was great to get to know him better. His relationships are sorely tested in this book, people he trusts are keeping major secrets and he isn't sure why but Valek has never been one to back away from a challenge and you just know he'll move heaven and earth to protect Yelena so anyone who is out to hurt her is going to end up in a world of trouble.

I have to admit I would have liked for Yelena and Valek to have spent more time together than they did but I can understand why things were that way and I think we're going to see them working closer together as the series continues. At least the time they do spend together was quality time and I love seeing how strong their bond is and how happy they still are after so many years as a couple. Adding Janco as a third point of view was brilliant, he is able to give us insight into both Yelena and Valek and he is just such a fun character to spend time with.

Yelena finds herself in an impossible situation here, she has several enemies coming at her and very little way of protecting herself against them. I don't want to go into too much detail about what happens but I found it interesting seeing her a bit out of her depth for a change, she is so used to being able to handle anything that is thrown at her and it comes as quite a shock to find herself feeling vulnerable. I had a suspicion about something for quite a long time and I was absolutely thrilled by the big reveal at the end of the story. In fact there are so many things I desperately want to talk about but I can't because they're all veering into spoiler territory.

Shadow Study is absolutely fantastic and it was one of those books that I wanted to devour in one sitting, so much so that I was annoyed because life kept getting in the way. It was great to catch up with some familiar faces but we are also introduced to some interesting new ones and the plot was just amazing. My only real problem with this book is that the rest of the trilogy isn't available for me to devour immediately - it's just not fair that I'm probably going to have to wait 2 years to get hold of book 3 and I actually think Maria V. Snyder is trying to kill me! I can't fault her though, any author who has me so totally invested in the lives of her characters is obviously doing something right and I will be right at the front of the queue on release day impatiently waiting for my copies of Night Study and Dawn Study when they are published.