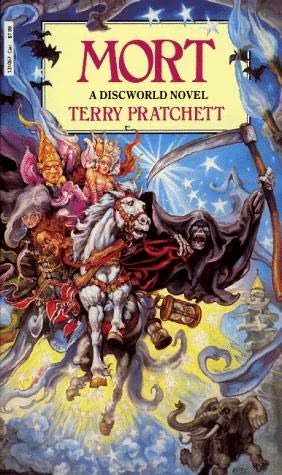 Death comes to us all. When he came to Mort, he offered him a job.

After being assured that being dead was not compulsory, Mort accepted. However, he soon found that romantic longings did not mix easily with the responsibilities of being Death's apprentice . . .

Review:
As someone who has been a fan of Terry Pratchett's Discworld series for close to twenty years I was absolutely devastated when he passed away last week. I have read and reread the earlier Discworld books so many times over the years but unfortunately I hadn't kept up with the more recent releases. I guess that's probably something to be glad about now because it means I still have a few new Discworld adventures ahead of me. Anyway, I've been telling myself for ages that I would do a series reread and review all of the books on my blog but although I've read a few of the books I've never managed to complete the task. After hearing the news I just had to dig out one of my old books to read though and since Death has always been one of my favourite Discworld characters I decided to start with his mini series and pick up Mort. I couldn't think of a more appropriate book to read right now and I have to say it cheered me up no end imagining the conversations that Terry Pratchett is now hopefully having with one of his most popular characters.

Although Death had played a minor role in several of the earlier books Mort is the first story where he is one of the main characters and it was here that we really start to get to know him better and understand what his life is like. He is such a fascinating character and I love reading his observations about humanity and life in general. Death doesn't look at things in the way that most of us do but he's an incredibly witty character and so much fun to read about. He also has a special fondness for cats so I'd love him for that if nothing else!

Death has decided it's time for him to take on an apprentice and Mort is the lucky guy who lands the job. Unfortunately things don't quite go to plan when Mort accidentally thwarts fate because he doesn't want to see a young girl die. Mort may have given Keli a temporary reprieve but when it's your time, it's your time and the world is determined to set things right. Mort has set a whole chain of events in motion and it's now up to him to figure out how to resolve things.

Mort contains all the crazy hijinks you'd expect from the Discworld but it is also a coming of age story as we get to see the kind of man that Mort will grow into and it gives a rather poignant look at Death both as a character and as an inevitable event in everyone's lives. I found the last couple of paragraphs particularly heart wrenching in the circumstances so I just have to end this review with them:


'Goodbye,' Mort said, and was surprised to find a lump in his throat. 'It's such an unpleasant word, isn't it?'

QUITE SO. Death grinned because, as has so often been remarked, he didn't have much option. But possibly he meant it, this time.

I PREFER AU REVOIR, he said.

RIP Sir Terry, I'm going to picture you sitting side by side with Death putting the world to rights over a game of chess! 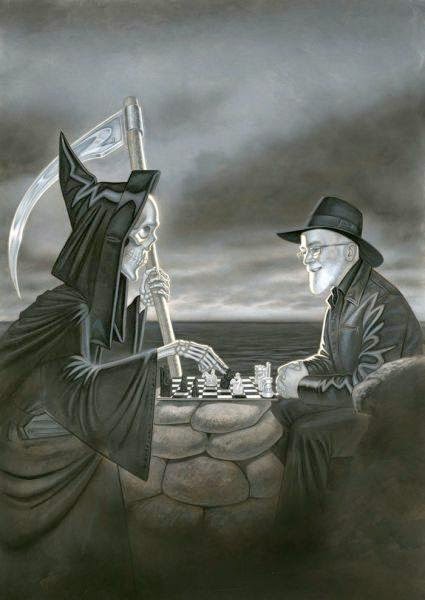 Other Reviews:
Notes of Life
If you have reviewed this book on your blog please leave a link to your review in the comments & I'll add the link here.