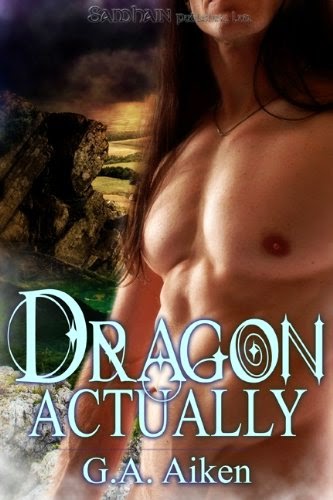 It's not always easy being a female warrior with a nickname like Annwyl the Bloody. Men tend to either cower in fear-a lot-or else salute. It's true that Annwyl has a knack for decapitating legions of her ruthless brother's soldiers without pausing for breath. But just once it would be nice to be able to really talk to a man, the way she can talk to Fearghus the Destroyer.

Too bad that Fearghus is a dragon, of the large, scaly, and deadly type. With him, Annwyl feels safe-a far cry from the feelings aroused by the hard-bodied, arrogant knight Fearghus has arranged to help train her for battle. With her days spent fighting a man who fills her with fierce, heady desire, and her nights spent in the company of a magical creature who could smite a village just by exhaling, Annwyl is sure life couldn't get any stranger.

And just wait until you meet the rest of the family...

Review:
You know how you sometimes need a palate cleanser? Something that is just going to be light hearted, funny and if we're completely honest a little on the ridiculous side? Well that's exactly what you're going to get if you pick up a copy of Dragon Actually, the first book in G.A. Aiken (AKA Shelly Laurenston) 's Dragon Kin series. It's full of sexy (and incredibly horny) dragons and kick ass warrior women who aren't afraid to take what they want. There are no blushing virgins or simpering, downtrodden women in this book, they are all fighters who give as good as they get when they come up against these very alpha males.

Annwyl the Bloody is a warrior princess who is raising an army to go up against her brother the king. She is determined to maker her brother pay for his sins and she's completely ruthless when it comes to achieving that goal earning her a reputation for beheading her enemies. When Annwyl is injured in battle she is rescued by a black dragon who takes her back to his cave and manages to heal her. Fearghus is also a fierce warrior but the dragons tend to keep to themselves and he has no interest in human wars. Where Annwyl's strength and determination have put men off in the past it is exactly what Fearghus finds so attractive about her and it isn't long before they are unable to resist the building attraction between them. Fearghus is keeping a big secret though, one that would normally make me really annoyed with a hero but in this case I just found it so funny watching things unfold that I forgot to be irritated with him. I loved these two, they have great chemistry and wicked banter but we also get to see a deeper friendship develop and I believed in them as a couple.

Dragon Actually also contains a bonus novella, Chains and Flames, that tells the story of how Fearghus's parents, Bercelak and Rhiannon, met and fell in love. I have to admit I wasn't sure I'd like Bercelak because he was a bit of a bastard in Dragon Actually but I ended up loving him from the very beginning of his story and it was Rhiannon who took a while to win me around. Rhiannon is a spoiled and pampered princess who is horrified when her mother tells her she must mate with low born Bercelak. She believes that she deserves so much better than him but when they are forced to spend time together she is surprised by how much they actually have in common. I think I ended up loving Bercelak even more than Fearghus, he's completely baddass and a well known warrior and he was also a Dom who made me a little weak at the knees.

Overall I thoroughly enjoyed both of these stories and I can't wait to continue reading the series. The whole dragon family are completely crazy and so much fun to read about so I'm hoping that all of the siblings will get a book of their own (I deliberately haven't looked ahead to see whose stories have already been written) eventually. I love reading about sibling relationships, the way they tease each other mercilessly but will always have each other's backs when it comes down to it, and I'm hoping that we'll get a chance to keep up with previous couples as we're introduced to new ones.