Review: About A Dragon - G.A. Aiken 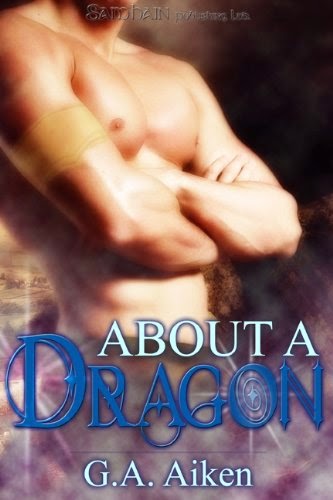 Talaith's life has never been easy. A goddess has forced her into servitude. Her husband despises her. And all those in her tiny village fear her. But just when she doesn't think her life can get any worse, she's pulled from her bed one morning to be burned at the stake for being a witch. What she never counted on was a terrifying silver dragon deciding to rescue her.

Briec the Mighty didn't really know what to do with a human female. Especially this one. Chatty and a bit of a complainer, he doesn't understand why she can't simply admit to herself that she wants him. Who wouldn't? He was Briec the Mighty after all. Females fought to spend the night in his arms. But this one tiny woman with her many secrets and her annoying habit of referring to him as "arrogant" has turned his simple dragon life upside down.

This book has been previously published as The Distressing Damsel by Shelly Laurenston and is available under its new title, in print, from Kensington Books.

Review:
Talaith is having a pretty rough day, she was dragged from her bed in the middle of the night by a mob of angry villagers and now she's about to burn on a pyre because they think she's a witch. As if that wasn't bad enough the person who comes to her rescue isn't her husband (he was too busy egging on the crowd) but a huge dragon who she is pretty sure intends to eat her for a snack later. Talaith isn't about to go down without a fight though and Briec may have caught more than he bargained for. Breic isn't quite sure why he felt the urge to rescue the human woman, not to make a meal of that's for sure, but he finds her strangely fascinating. Now he's brought her back to his cave he isn't quite sure what to do with her but he quickly realises that he doesn't want to let her go.

This series is so much fun to read, sometimes you just want some brain candy, a story that is pure entertainment, one that will make you laugh out loud and have you giggling to yourself the whole way through and that's exactly what the Dragon Kin series is for me. G.A. Aiken's dragons are completely over the top cavemen and the women who tame them are all fierce, opinionated warriors who are more than capable of standing their ground. Briec is the most arrogant dragon we've met so far (and that's saying something!) but Talaith isn't impressed, she refuses to bow down before any man or dragon and she gives as good as she gets. The pair of them spark off each other constantly and both love nothing more than a good argument, apart from perhaps the make up sex that comes afterwards. They make a great couple but Talaith has a secret mission that she must complete and nothing, not even her love for an arrogant dragon, will sway her from her task. Briec has waited a long time for his mate and he isn't going to let her get away from him that easily though.

One of the things I love most about this series is the family, all of the dragons are completely crazy and their interactions are absolutely hilarious. About A Dragon gives us the chance to catch up with previous couple Feargus and Annwyl along with Briec's other siblings Gwenvael, Éibhear and Morfyd. I love the banter between the brothers and their sister and I can't wait to read each of their stories. This series has been so entertaining and I have a feeling it's only going to get better with each new book.