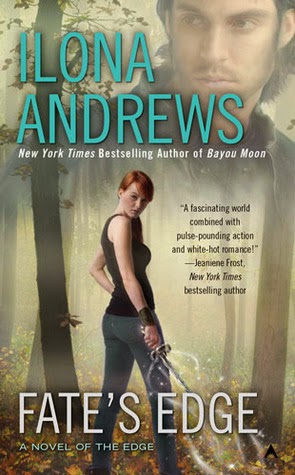 Born into a family of con men, Audrey Callahan left behind her life in the Edge for an unmagical existence in the Broken. Audrey is determined to stay on the straight and narrow, but when her brother gets into hot water, she takes on one last heist and finds herself matching wits with a jack-of-all-trades.

Kaldar Mar is a gambler, a lawyer, a thief, and a spy with some unusual talents that guarantee him lucrative work. His latest assignment has him tracking down a stolen item, and Kaldar doesn't expect much of a challenge - until Audrey turns up to give him a run for his money.

But when the missing object falls into the hands of a lethal criminal, Kaldar realises that in order to finish the job and survive, he's going to need Audrey's help . . .

Review:
I know I've said it before but I think it's worth repeating - Ilona and Gordon Andrews can do no wrong! Seriously, this writing duo could put their shopping list in a book and I would buy it and devour every page. I still can't believe that this is my first time reading their Edge series but I can guarantee it won't be the last, I'm actually already contemplating when I can fit in my first reread and I've not even read the final book yet. These books just get better and better and I can't wait to see what happens next.

I loved Kaldar in the last book so I was excited to find out this was his story, he's just the kind of guy it would be a blast spending time with and I couldn't wait to get to know him better. I love his sense of humour, I love his cheeky side, I love the way he's always bending the rules but most of all I love his sense of loyalty towards his family. Kaldar is a cheat and a conman but if you've earned his friendship he would never betray you. A guy like Kaldar needs a special woman and that's just what he gets with Audrey. She matches him every step of the way, raised in a family of conmen Audrey knows all the tricks of the trade and she has Kaldar's card marked. She often knows what he's thinking before he does and she's quick witted enough to take any cue he throws her way on a job. The two of them spark off each other brilliantly, the sexual tension is intense and boy does it explode when they finally give into temptation. Audrey is a loner who has never had a family she could rely on, she's been betrayed by the people who should have protected her so she doesn't give her trust easily and I loved seeing Kaldar and the others worm their way through her defences.

I have to give a shout out to the side characters in this story too, not only do we have an awesome animal sidekick Ling the Merciless but we also get to catch up with the previous couples which was great. More importantly than that both Jack and George (who I missed desperately in the last book) have major roles to play in this story along with Kaldar's cousin Gaston. I just love those boys so much, they have me laughing out loud most of the time but they make my heart melt too. In fact, I would happily adopt them if I didn't think their big sister would kill me for trying to take them away. I would absolutely love to read full length novels about them both so I really hope Ilona and Gordon decide to revisit their characters in the future.

Fate's Edge is pretty much non stop action, there is a lot going on and danger around every corner and I didn't want to put the book down for a second. The romance is perfect, there is just the right mix of humour and edge of your seat drama and I love the fact that the women are just as kick arse as the men. None of the females in this series have needed a man to rescue them, in fact they're just as likely to be the ones doing the rescuing, which is something I absolutely adore. I can't wait to dive into Steel's Edge but at the same time I'm kind of sad to know that the series will be over soon. The books will definitely be living on my keeper shelf though and I'll be recommending them to everyone I know.