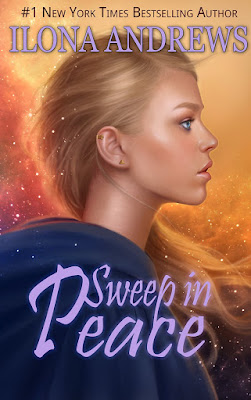 Dina DeMille doesn’t run your typical Bed and Breakfast. Her inn defies laws of physics, her fluffy dog is secretly a monster, and the only paying guest is a former Galactic tyrant with a price on her head. But the inn needs guests to thrive, and guests have been scarce, so when an Arbitrator shows up at Dina's door and asks her to host a peace summit between three warring species, she jumps on the chance.

Unfortunately, for Dina, keeping the peace between Space Vampires, the Hope-Crushing Horde, and the devious Merchants of Baha-char is much easier said than done. On top of keeping her guests from murdering each other, she must find a chef, remodel the inn...and risk everything, even her life, to save the man she might fall in love with. But then it's all in the day's work for an Innkeeper . . .

Review:
It's no secret that I'm a total fangirl when it comes to Ilona and Gordon Andrews, in fact I've probably said that at the beginning of nearly all my reviews of their books, and I'm completely addicted to their Inkeeper Chronicles. I love the way these stories are initially posted in free instalments for fans to read online, we get to comment on the story as it's written and I think the feedback received possibly helps take the stories in slightly different directions to where they could have gone if they were written in the traditional way. As much as I love following that process it's a unique kind of torture having these amazing stories dolled out in tiny pieces over such a long time period so I was desperate to get my hands on a final, finished copy so I could read it from start to end in one sitting.

So, I've read Sweep in Peace twice now and I absolutely devoured it this time around. The series is just getting better and better and I adore Dina and the other characters. I'm going to assume that anyone reading this review will already have read Clean Sweep so I'm not going to give you background information on Gertrude Hunt or Innkeepers in general - I'd rather focus on this story and what's so fantastic about it. I'm loving learning more about Dina's family (I still have high hopes that we'll meet her siblings one day and I desperately want to see her solve the mystery surrounding her missing parents!) and also about Innkeeper abilities. Dina is basically master of the universe when she's inside Gertrude Hunt, what she says goes and I love seeing her lay down the law when she needs to. Most of the time Dina bends over backwards to make sure her guests have everything they could possibly need but anyone who pushes her too far should be very, very careful because payback will be a bitch!

Long term inn resident Caldenia is fantastic, she's like a sweet old lady one minute but then she'll be creepy as hell the next and I love how unpredictable she is. Beast is her usual cute and charming self but she's also very quick to defend Dina and her territory when needed. Then we have a new (hopefully permenant) cast member Orro, a fabulous but disgraced chef who looks set to keep Dina on her toes but I'm sure his wonderful food will make it worth the effort. I'm going to admit I was disappointed that we didn't see more of Sean in this instalment, I have such high hopes for him and Dina so I was hoping for a little more romance BUT I actually think the development of his character was spot on and although he wasn't around as much as I'd have liked I'm very hopeful that's going to change in the next book.

Now let's talk about Dina's latest guests. Anyone who has already read the Edge series are going to be thrilled to spot some familiar faces and I have to admit to some very excited happy dancing when George first makes an appearance! I loved the younger generation of characters in the Edge books and it was so much fun to see the fully grown up and now out in the world living their own lives. I really hope that we'll see more of them in the future, either as guests in the Innkeeper Chronicles or perhaps in a spin off series of their own - I think George's new job gives plenty of scope for at least a couple of books but I'm not sure Dina will be so keen on having him as a guest again any time in the near future!

Dina finds herself facing the challenge of a lifetime when George approaches her asking if she'll host a peace summit at Gertrude Hunt. George is working as an Arbitrator and it is up to him to bring peace to a war torn planet. Unfortunately that means meeting the demands of all three interested parties, each of whom has their own unique customs and requirements. War has been waging on Nexus for twenty years with much bloodshed and loss on all sides but most people are more keen on avenging their dead than they are on bringing about an end to the fighting. It's George's job to find a solution but it'll be up to Dina to keep all three groups separate and prevent anyone killing each other during the talks.

As great as it was to see George (and a few other character's who I'm not going to name drop because it'll be more fun for readers to get a surprise) I have to admit I was surprised at how ruthless and calculating he has become. He was always intelligent but he proves here that he's willing to do whatever it takes to achieve his goals even if it does mean he ends up making himself a few enemies along the way. I actually kind of admired him for doing what had to be done but there were more than a few times I wanted to punch him in the face, particularly for the way he used Dina and put her at risk by withholding information from her. He's definitely turned into a very complex character and I have to believe we've not seen the last of him or his allies.

Sweep In Peace is wonderful, it has everything you could hope for from a book by Team Andrews - great humour, quirky but realistic characters and a well thought out world full of unique and unusual creatures, customs and history. Now Ilona and Gordon please, please bring on the torturous release of book three, in tiny bite sized portions that will have me desperately begging for more and stalking your website on a daily basis! I can't wait :o)

Source: Received from the author in exchange for an honest review but I've also purchased my own finished copy because I love it so much I need it on my shelves!