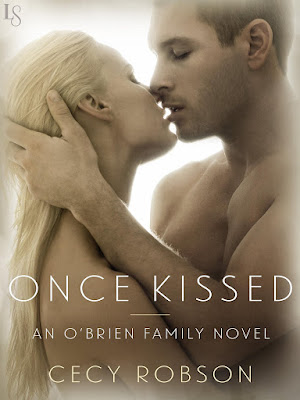 Once they shared a night of passion. Now a chance encounter forces them back together. In Cecy Robson’s O’Brien Family series debut—perfect for readers of Monica Murphy and J. Lynn—two total opposites find that the flames of desire are still smoldering.

Tough-as-steel cop Curran O’Brien is quickly rising through the ranks of the Philadelphia police department. But when his rookie partner is almost killed under his watch, Curran just wants to prove he still has what it takes to walk among Philly’s finest. So he’s pissed to be stuck on a cushy security assignment for the DA’s office . . . until he gets a good look at the sweet, straitlaced intern he’s supposed to protect—but not touch.

Tess Newart recognizes Curran instantly. How could she not? Back in college she tied this former frat boy to the bed with her argyle socks! That sizzling one-night stand was the only indiscretion Tess ever allowed herself. She has survived law school so far, despite being pushed to succeed by her overbearing father. Now that she’s interning on a major case against a ruthless crime boss, she won’t jeopardize her career by giving in to temptation again. She just never expected temptation to look so damn hot in uniform.

Tess knows her father has other plans for her, and they don’t include Curran. But soon she’s falling for him all over again. And when danger emerges, Curran will prove just how good a bad-boy cop can be.

Review:
From the minute we met the O'Brien clan in Once Pure I knew I was going to love them, I guess it could be because I have such a small family but I've always loved reading about sibling relationships and since Killian has five brothers and one sister who all have very large personalities I couldn't wait to start this series. Obviously if you've read Killian's book (and I'd highly recommend it if you haven't because it was fantastic!) you'll already be familiar with the family but this story completely stands alone so you won't be lost if you're new to Cecy Robson's writing.

Curran and Tess shared one scorching hot night together back in college but haven't seen each other since, there's no bad blood between them though, it's just the way life panned out. Tess has been focused on her law degree and has her hard work has paid off landing her the much sought after position of intern to the Assistant District Attorney, Declan O'Brien. Declan is working on the case of a lifetime and is close to bringing down a major crime family but that means he, along with everyone he works with, is at high risk of retaliation and in need of police protection. Curran has dedicated his life to his job and loves being a Detective but after a major incident that left his rookie seriously injured he has been suffering from PTSD and has lost the confidence of his fellow officers. When Curran is assigned to protect Tess the last person he is expecting to see is the woman he has been fantasising about since college but the buttoned up young woman is very different to the sexy, uninhibited girl he remembers. Tess has put everything into her career in the hope of escaping her overbearing father so the last thing she needs is the distraction Curran causes her but his charms aren't easy to resist.

Cecy Robson always writes such brilliant characters and that is definitely the case again in Once Kissed. It was very easy to like both Tess and Curran and I was rooting for their relationship from the get go. What I love about this book is that there is very little in the way of pointless drama between the main couple, I'm so bored of reading about couples who push each other away for stupid reasons or who are fighting against the idea of a relationship so it makes a change to read about a couple who genuinely want to make a life together. That isn't to say everything is plain sailing for them, there are plenty of external influences that cause problems for the pair, but neither of them is trying to deny their feelings or the connection that they have.

Throw in the funny banter between the O'Brien siblings and you're definitely on to a winner with this one! I'm excited to get to know the rest of the family better and I'm sure I'm going to love this series just as much as the Shattered Past one.