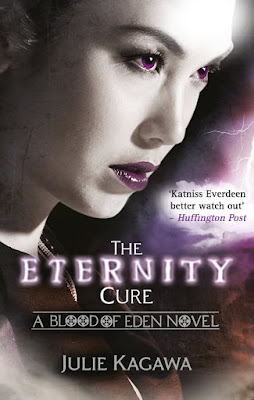 In Allison Sekemoto's world, there is one rule left: Blood calls to blood

She has done the unthinkable: died so that she might continue to live. Cast out of Eden and separated from the boy she dared to love, Allie will follow the call of blood to save her creator, Kanin, from the psychotic vampire Sarren. But when the trail leads to Allie's birthplace in New Covington, what Allie finds there will change the world forever—and possibly end human and vampire existence.

There's a new plague on the rise, a strain of the Red Lung virus that wiped out most of humanity generations ago—and this strain is deadly to humans and vampires alike. The only hope for a cure lies in the secrets Kanin carries, if Allie can get to him in time.

Allison thought that immortality was forever. But now, with eternity itself hanging in the balance, the lines between human and monster will blur even further, and Allie must face another choice she could never have imagined having to make.

Review:
I'm finding it really hard to write a review for The Eternity Cure, I absolutely loved the first book in this series but for some reason this one didn't quite live up to my expectations. I enjoyed how dark The Immortal Rules was and it was great seeing a nasty side to vampires again but the thing I loved most was Allie, She was just such a fantastic character, she had been changed into the thing she hated the most because it was the only way to survive but she remained the kind of person who put everyone else's needs above her own even though she considered herself a monster. Allie was strong, smart and capable and more than anything she was a survivor, she was willing to fight for what she believed in and she wouldn't back down no matter what danger she had to face.

Unfortunately I think Allie lost some of that kick-arse attitude in this book, it's hard to put my finger on exactly what felt so different about her here but she started to really irritate me. I think it was the way she constantly mooned around over Zeke that started it (even when they're fighting for their lives she's more interested in thinking about kissing him than worrying about how to kill her enemies!) but it was also the fact that she's become so indecisive, the way she's turned her back on her principles to take the easy route, the way she spent half the book complaining about being a vampire and how terrible it was and especially the way she was so judgemental of other vampires for doing things that she has done herself. I don't know how it all went so horribly wrong with her and I really, REALLY hope she pulls herself together in The Forever Song.

As far as the plot goes the beginning of the book felt very slow to me, it seemed to take a long time for things to get going but once the pace picked up I started enjoying the story much more. I actually found myself coming to like Jackal (something I never would have expected!) probably because he was so honest about who and what he was. He had no problem killing people who got in his way which is something that Allie was constantly judging him for but he never pretends to be a good guy and he is after all a vampire. Allie herself was happy to kill when she felt the situation required it but she constantly berated Jackal for not following her own self imposed set of rules and I felt that she was a little hypocritical in her attitude.

I didn't hate The Eternity Cure, in fact there were a lot of things I liked about it - the search for Kanin, the changes to the Red Lung virus and the battle with Sarren to name a few - but it didn't wow me as much as I'd hoped it would. I'm still going to be reading the final book though because I really do have to know how things are going to turn out for Allie and her friends.