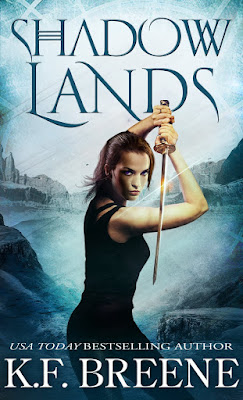 In order to finally claim her title of Chosen and lead the Shadow People out of the Land of Mist, Shanti must make it through a century's old system to test her battle awareness, her fighting skill, and her ability to stay alive. She's about to enter The Trials, and she must do it alone.

Separated from Shanti on a dangerous island, Cayan must learn to use his mental skill while keeping his men safe from the people set out to kill them. But as more Inkna and Graygual flood the island, Cayan hears of a sinister force deep in the woods, rigging The Trials and killing any who venture too close.

It is now a race against time. The battle to become the Chosen has begun, and the victor is anything but decided.

Review:
Every so often you discover a series that hooks you in completely and the Warrior Chronicles is one of those series for me. I devoured the first three books in less than a week (even though it's taken me a long time to get around to writing this final review!) and I've been waiting impatiently for the release of Invasion ever since I finished Shadow Lands. Well, I finally have a copy in my hands so I'm going to write a really quick review of this book so I can dive back in and catch up with Shanti and her friends.

Shanti never wanted the title of Chosen but she's finally come to accept that she doesn't have any other choice. If she wants to defeat her enemies and bring her people back out of hiding then she's going to need every ally she can get and the warriors from the Shadow Lands would be a huge asset to her. The only way she'll get them to help her is by completing the trials and it's a challenge she must face alone. Cayan has reservations about letting Shanti go in without him, especially when he starts hearing rumours that their enemy is cheating in order to complete the trials before she can, but he is facing troubles of his own and along with his best fighters he must hold their enemy at bay until Shanti can prove herself to the Shadow warriors and gain their assistance.

I still love Shanti, she is such a fantastic character and I love the way she constantly pushes the boundaries and forces people to sit up and take notice of her. She's never been one to follow the rules and, along with Cayan, she always does the unexpected. I loved seeing them on the same page here, they have finally sorted out their difficulties and put the past behind them and they make a brilliant team. Their romance has been great, it developed so slowly but has definitely been worth the wait and I have high hopes for this couple as the series continues.

Alongside Shanti and Cayan we have a fantastic cast of side characters. I still think Sanders, Marc and Rohnan are all brilliant and I absolutely loved the addition of Ruisa. I mentioned in my review of Hunted that I wanted more female characters in the series and that wish has definitely been granted here. Ruisa is brilliant, her skill set is very different from Shanti's but she's just as capable and possibly even more ruthless. She certainly knows her way around poisons and I loved seeing her prove herself to Sanders and Shanti's Honor Guard. I'm still irritated that those boys don't have a better opinion of women when it comes to battle but I'm glad that they have both Shanti and Ruisa challenging their beliefs and making them rethink their position on female warriors.

This series is going from strength to strength, there is plenty of action, a good amount of humour and I just love diving into this world. I don't really have much else to say other than to tell you to READ IT if you haven't already, you do need to read these books in order though so make sure you start with Chosen!