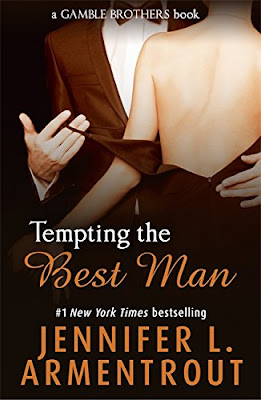 Madison Daniels has worshipped her brother's best friend since they were kids. Everyone things she and Chase gamble would make the perfect couple, but there are two major flaws in their logic: One, Chase has sworn off relationships of any kind, and two, after blurring the line between friends and lovers for one night four years ago, they can't stop bickering.

Forced together for her brother's wedding getaway, Madison and Chase decide to call a truce for the happy couple. Except all bets are off when they have to shack up in a tacky 70's honeymoon suite and survive the family's attempts to prove their spark can be used for more than fighting. That is if they don't strangle each other first . . .

Review:
Madison has been in love with her older brother's best friend for as long as she can remember but apart from one drunken night Chase has never shown any interest in her as anything more than friends. Their easy friendship was destroyed the night they made out and then Chase walked away without a backward glance and now, on the rare occasions when Madison isn't able to avoid him, they find themselves constantly bickering. Chase always cherished his friendship with Madison but after watching his father's constant cheating destroy his mother he's determined to avoid relationships himself. When a family wedding forces the two of them into close proximity it's very hard to resist the heat that builds between them but Chase hasn't changed his mind about relationships and Madison is determined not to get her heart broken all over again.

I tend to have high expectations to Jennifer L. Armentrout / J. Lynn's contemporary romances and I love the older brother's best friend trope so I was looking forward to reading Tempting the Best Man and I hate to admit it wasn't quite as good as I had hoped it would be. It's not a bad read by any means but it's definitely not one of her best. The story is quite predictable, that isn't something that bothers me on it's own - after all most contemporary romance is predictable to a certain extent - but coupled with the completely forced and unnecessary drama towards the end it just irritated the heck out of me.

For the most part I liked both Madison and Chase, they have great chemistry and I enjoyed the heat between them. I loved the interactions with Madison's family and Chase's brothers, that family dynamic always adds a little extra to the story and it was amusing watching them meddle in the budding relationship. Everyone else could see how Madison and Chase felt about each other and they were determined to push the two of them together. There was a lot of humour in the story and it was a great light hearted read but I could have done without the contrived drama towards the end of the story. It definitely lost a star for the last few chapters, especially since there was a huge amount of drama and stress and then it was all resolved within a couple of pages. I liked Chase's brothers enough to want to read their stories though and I'm definitely hoping that the series will only get better from here.