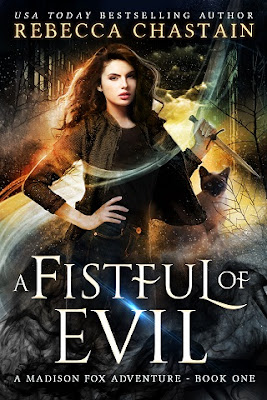 Madison’s new job would be perfect, if not for all the creatures trying to eat her soul…

Madison Fox just learned that her ability to see souls is more than a sight: It’s a weapon for fighting evil. The only problem is she doesn’t have a clue what she’s doing.

On the positive side, her money problems are over and her coworker is smoking hot. On the negative side, evil creatures now actively hunt her, and deadly experiences are becoming the norm.

When she thinks it couldn’t get worse, a powerful evil sets up shop at a local hotel’s video game convention, and it’s got its eye on more than the gaming geeks—it's hungry for Madison’s soul. Madison needs to become an expert illuminant enforcer overnight to save her job, her region...and her life.

For a wildly imaginative story packed full of supernatural horrors, kick-butt action, and laugh-out-loud moments, you won’t want to miss this series starter.

Review:
Madison has always been able to see people's souls but it's something she tries very hard not to think about since it's only ever caused her trouble. After losing her job she applies for a position at a bumper sticker company, she knows she's woefully under qualified but she's getting desperate and something about the ad makes her take a chance. What she didn't realise is that her soul-sight comes with some much more useful abilities and now she suddenly finds herself working as the area's Illuminant Enforcer. Madison has no idea what she's doing but the pay is fantastic and she likes the idea of ridding the world of evil so surely she can pick things up as she goes along?

A Fistful of Evil is a promising start to a new fun and light hearted urban fantasy series. The blurb likens Madison to Stephanie Plum and I think that's a really suitable comparison because the series has a very similar feel to it even though it has supernatural elements. Madison manages to get herself into the same kind of crazy situations that Stephanie does and I laughed a lot while I was reading this book. I'm not going to focus on the similarities because I do think this series more than stands out on it's own merits but I do think if you enjoy the Stephanie Plum books and you're a fan of the paranormal then it would definitely be worth giving these books a try too.

Madison is a likeable main character, she's a bit of a klutz and she's hopelessly unprepared for her new job but that isn't entirely her own fault since her predecessor was so eager to get out the door that he willingly dropped her in at the deep end without even warning her colleagues she had no prior training. She may be inexperienced but her heart is in the right place and even when she makes a few silly decisions you could always understand why everything played out the way it did. Madison wants to learn, she wants to be good at her job and she's willing to work hard to learn how to use her abilities so I have every confidence that she'll improve as she starts to gain confidence and experience.

The one place that the story fell down for me was when Madison had to go undercover at a convention. I really didn't like the way all the characters at the convention were so stereotypical, especially the way the only women there were all "booth babes" in tiny outfits just there to be ogled at by the nerdy guys. This whole section just made me uncomfortable and I didn't like the way Madison was so judgemental of everyone around her. It left a bit of a nasty after taste in my mouth so unfortunately the book lost a star for that.

I don't want to focus on the negative though because it was far outweighed by the positives. I enjoyed the humour surrounding Madison's incredible ability to find trouble and the amusing bumper stickers that kicked off each chapter, I liked what I've seen of her work colleagues, I enjoyed the plot and the range of interesting supernatural creatures and I loved Madison's feline sidekick Mr. Bond! I definitely have high hopes for this series and I'm looking forward to reading the next book A Fistful of Fire.

Source: Received from Rebecca Chastain in exchange for an honest review