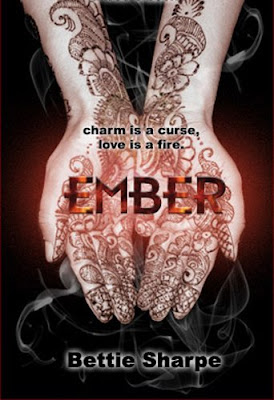 Everyone loves Prince Charming. They have to—he’s cursed. Every man must respect him. Every woman must desire him. One look, and all is lost.

Ember would rather carve out a piece of her soul than be enslaved by passions not her own. She turns to the dark arts to save her heart and becomes the one woman in the kingdom able to resist the Prince’s Charm.

Poor girl. If Ember had spent less time studying magic and more time studying human nature, she might have guessed that a man who gets everything and everyone he wants will come to want the one woman he cannot have.

Warning: This story contains sex, violence, and naughty words.
It’s based on a fairytale, but it isn’t for kids.

Review:
Forget everything you've ever heard about Cinderella, the true tale is nothing like the fairytale that Disney would have you believe. If you want to know what REALLY happened then look no further than Ember by Bettie Sharpe. The opening lines should give you a hint of what to expect inside these pages:

"I know you think you've heard this story before, but you're wrong. Some would have it that this story begins with a virtuous virgin, a young woman of honesty and integrity sucker punched by cruel fortune and forced to sleep among the cinders while her moral inferiors live the life that was meant to be hers. Bullshit."

So now that we're clear on what this story is NOT let's have a look at what it is. This is the story of Ember, a fiercely independent young woman who is so determined not to fall prey to a curse that she cuts off her own finger and gives part of herself to the fire so she can become a witch with enough powers to resist a prince's charms. You see Ember lives in a land with a cursed prince, Adrian was "gifted" with the ability to charm everyone he meets, every woman wants to bed him and every man respects him. He can have everything he wants with absolutely no effort and you can just imagine the kind of man that has made him. Ember may have started with magic but she isn't immune to Adrian's curse, her ability does give her a slight resistance though and she will do whatever it takes to break his hold over her even if it means turning to the darker side of magic and offering up blood sacrifices to do it.

I absolutely loved this story, I loved it so much that I've already read it twice and without a doubt it's one of the best fairytale retellings I've ever come across. Bettie Sharpe has done an amazing job of turning everything we know about the tale of Cinderella on it's head, nothing is what you'd expect yet there are explanations for all of the elements of the original story that make this one feel truly authentic. Ember isn't treated as a second class citizen in her own home, in fact her step-mother and step-sisters are her best friends, and she definitely isn't someone who needs to be rescued since she is more than capable of looking after herself and everyone else she cares about. There are so many positive messages in this story and it's impressive how much the author has managed to fit into 90 pages. It's not often that you read a book and can't think of a single thing to complain about but that was the case here and I need to start making my way through the author's other titles ASAP.

This is definitely an adult retelling but if you're looking for a darker version of Cinderella, a story that has magic, curses and more than a little smut then you're going to love Ember.

Source: I read this book for free on Bettie Sharp's website