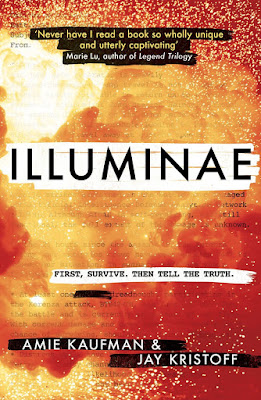 This morning, Kady thought breaking up with Ezra was the hardest thing she’d have to do.

This afternoon, her planet was invaded.

The year is 2575, and two rival megacorporations are at war over a planet that’s little more than an ice-covered speck at the edge of the universe. Too bad nobody thought to warn the people living on it. With enemy fire raining down on them, Kady and Ezra—who are barely even talking to each other—are forced to fight their way onto an evacuating fleet, with an enemy warship in hot pursuit.

But their problems are just getting started. A deadly plague has broken out and is mutating, with terrifying results; the fleet's AI, which should be protecting them, may actually be their enemy; and nobody in charge will say what’s really going on. As Kady hacks into a tangled web of data to find the truth, it's clear only one person can help her bring it all to light: the ex-boyfriend she swore she'd never speak to again.

Told through a fascinating dossier of hacked documents—including emails, schematics, military files, IMs, medical reports, interviews, and more—Illuminae is the first book in a heart-stopping, high-octane trilogy about lives interrupted, the price of truth, and the courage of everyday heroes.

Review:
Kady and Ezra live in a small mining colony on a distant planet called Kerenza, life is hard but it's always been peaceful until the day an army descends and the colony is destroyed. The only survivors are now on three ships desperately trying to reach civilization and safety before their enemies can catch them and murder the only witnesses to what happened on the planet. After another terrible tragedy Kady becomes convinced that the ship commanders are keeping secrets from them and, along with a hacker friend she has made, she becomes determined to find out what is really happening on board the Alexander.

Having read and enjoyed books by both Aime Kaufman and Jay Kristoff in the past I wanted to read Illuminae from the moment I first heard about it. Illuminae is like nothing I've ever read before and I absolutely loved the untraditional format the story takes. Readers have to put the pieces together from interview transcripts, emails, instant message conversations, diary entries, briefing notes, diagrams, blueprints, observations made from CCTV footage and much, much more and I was surprised at how well this format works. I'll admit I was worried it would be hard to follow or that I'd have trouble connecting to the characters because of the way the story is told but I actually found it incredibly engaging and it was nearly impossible to put the book down once I'd started reading. Because there aren't normal chapters I'd constantly be telling myself just one more document, or I'll just read this conversation but finding I'd read another fifty pages before I knew it.

The characters are brilliant, Kady is intelligent and a fighter who will do whatever it takes to uncover the truth. She thinks nothing of standing up to superior officers or hacking her way through the system to find out what is really going on and I loved the way she dealt with everything that is thrown at her. Ezra is more trusting and finds it hard to believe that there could be anything untoward happening but he steps up when it really matters and believes in Kady enough to help her in any way he can. I thought that the relationship between them was brilliant, they had literally broken up a couple of hours before their planet was invaded but it was obvious from the beginning that Ezra still had feelings for Kady and wanted to rebuild things between them. Kady is more standoffish at first and I found her harder to warm up to but as you start to get to know her you understand how damaged she is by everything she has lost and that she is terrified of having her heart broken all over again.

I don't really want to say too much more about the plot because I'd hate to spoil the journey you're about to embark on but Illuminae is incredibly fast paced and addictive and I loved every minute of it! If you're even slightly curious about this book then I'd urge you to find a print copy in a bookshop or library and just flick through a few random pages, I can pretty much guarantee that something will capture your attention and make you want to give it a try. I'm so incredibly excited that this is the first book in a trilogy and I absolutely can't wait to get my hands on a copy of the next book so I really hope the authors are writing fast and I won't have to wait too long!

Source: Received from Rock the Boat in exchange for an honest review