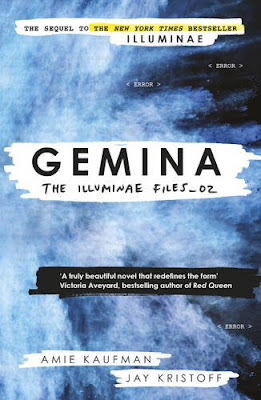 Moving to a space station at the edge of the galaxy was always going to be the death of Hanna’s social life. Nobody said it might actually get her killed.

The sci-fi saga that began with the breakout bestseller Illuminae continues on board the Jump Station Heimdall, where two new characters will confront the next wave of the BeiTech assault.

Hanna is the station captain’s pampered daughter; Nik the reluctant member of a notorious crime family. But while the pair are struggling with the realities of life aboard the galaxy's most boring space station, little do they know that Kady Grant and the Hypatia are headed right toward Heimdall, carrying news of the Kerenza invasion.

When an elite BeiTech strike team invades the station, Hanna and Nik are thrown together to defend their home. But alien predators are picking off the station residents one by one, and a malfunction in the station's wormhole means the space-time continuum might be ripped in two before dinner. Soon Hanna and Nik aren’t just fighting for their own survival; the fate of everyone on the Hypatia—and possibly the known universe—is in their hands.

But relax. They've totally got this. They hope.

Once again told through a compelling dossier of emails, IMs, classified files, transcripts, and schematics, Gemina raises the stakes of the Illuminae Files, hurling readers into an enthralling new story that will leave them breathless.

Review:
As the Hypatia continues it's journey to the Hemidall Jump Station where they are hoping to get assistance and spread the word about the actions of BeiTech on the mining colony of Kerenza, Hemidall find themselves fighting their own battle of survival after being invaded by a BeiTech cleanup crew. Hanna, the ship captain's spoilt and pampered daughter, finds herself teaming up with an unlikely ally as she tries to save the station, Hypatia and the entire universe from BeiTech's clutches.

I absolutely loved Illuminae when I read it last year so Gemina was one of my most anticipated reads of 2016. As excited as I was to read it I was also a little nervous, we've all been stung before when a sequel to a favourite book fails to live up to expectations so I was worried that might happen here. Thankfully I couldn't have been more wrong because Amie Kaufman and Jay Kristoff knocked it out of the park and they actually managed to create an even more amazing story in Gemina.

The story is told in the same format as the previous book so it's full of interviews, instant message conversations, emails, transcripts from video footage and so much more. This time around we also get to see the inside of Hanna's journal which has been beautifully illustrated by Marie Lu and just makes the book even more interesting to flick through. I'm still amazed at how well this mixed format works for telling the story but somehow it just fits perfectly. You'd think that it would be harder to connect to the characters but if anything I found myself getting invested in their story even more quickly than I normally would and it certainly makes for an incredibly addictive read. Even though it comes in at over 600 pages this is the kind of book you could end up devouring in one sitting because it's an incredibly quick read full of action and some incredible plot twists that will have you on the edge of your seat.

I didn't think I was going to like Hanna much in the beginning, she comes across as very spoiled and not at all what I'd think of as heroine material but there is a lot more to her than meets the eye. Her father's idea of bonding time was to talk battle strategy and learn martial arts so she actually has a unique skill set that sees her in good stead when the station comes under attack. Nik is a roguish bad boy who is immediately likeable, he comes from a family of criminals so he's used to living under the radar and surviving on his wits so he's the kind of guy you'd want to have on your side when you're in trouble. They are up against a ruthless enemy though, a crew with more manpower who are better trained and have far better equipment than Nik or Hanna could ever hope to find on a civilian ship. Their only advantage is that they're on home territory, they know the station like the back of their hand and they have an ace up their sleeve in the form of Nik's cousin, Ella, who is an expert hacker.

I don't want to talk too much about the plot so I'll just say that Gemina has a bit of everything: heartstopping action, brilliant banter, blood and gore, scary monsters (both human and other), a touch of romance and twists that'll slap you around the face with their brilliance. This series is absolutely outstanding and I can't think of anything else out there that quite compares. The final book on the trilogy is at the absolute top of my wish list and I can't wait to see how the authors tie everything together in the end. I suspect that Hanna, Nik, Kady and Ezra have a long way to go before they find safety from BeiTech.

Source: Received from Rock the Boat in exchange for an honest review