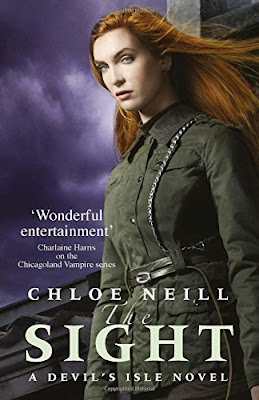 The paranormal war that engulfed New Orleans seven years ago is over. But the battle for the city is just beginning . . .

Claire Connolly is a Sensitive, infected with magic when the Veil that divides humanity from the world beyond fell. Magic can easily consume and destroy a Sensitive, and if Claire's secret is discovered she'll be locked into the walled district of Devil's Isle along with every other Paranormal left in the city.

Bounty hunter Liam Quinn discovered Claire's secret, but refused to turn her in. Together they saved New Orleans from the resurgence of magic that nearly destroyed it. But now a dangerous cult is on the rise, and it will take both Claire and Liam - and magical allies within Devil's Isle's towering walls - to defeat the occult threat before magic corrupts them both . . .

Review:
Claire and Liam may have already saved New Orleans from disaster once but that doesn't mean things are about to calm down, in fact they've now got an even bigger battle on their hands as an evil cult sets out to destroy Devil's Isle and all it's Paranormal inhabitants. The terrorists will stop at nothing to achieve their goal and they don't care how many civilian casualties get caught in the crossfire which makes them even more dangerous. Claire is still trying to come to terms with the fact that she's a Sensitive and what that could mean for her future but she's not going to sit idly by while a group of madmen try to destroy what's left of her city.

The Sight jumps into Claire's story right where The Veil left off, Claire is juggling running her store with her new role as a trainee Bounty Hunter working alongside Liam and the chemistry between them is just as intense as ever. Liam is one of the only people who knows Claire's secret but instead of turning her into the authorities and destroying her life he's actually trying to help her learn to deal with her abilities so they don't end up turning her into a monster. As much as they are attracted to each other there are a million reasons why they shouldn't be a couple, Claire is willing to take the risk but Liam is more gunshy because he knows exactly what he'd have to do if Claire's powers get the better of her. The tension between them ratchets up nicely throughout the story but you're going to have to read the book for yourself to find out whether they actually give in to temptation.

There is so much going on in this series that I don't ever want the books to end. First you have the ongoing struggles of the Paranormal population on Devil's Isle, most of them didn't ask to be here and just want to be able to live their lives in peace but they're treated like animals and imprisoned on the Isle. Then you have the cult who are determined to wipe the Paranormals off the face of the planet, they think that by banning magic and destroying anything to do with it they can reverse the damage that was done when the Veil first opened and they'll fight to the death to achieve their goals. Finally you have the group that are trying to reopen the Veil so they can finish the war they started seven years ago.

Claire and Liam are stuck in the middle trying to do what's best for everyone involved. Claire is forced to face up to what her future could be like if she doesn't learn to control her magic, Liam is forced to decide whether he can walk away from her for good or whether she is worth taking a risk on, Claire's friends and allies also have decisions of their own to make and whatever they decide Claire is the one with the most to lose. Chloe Neill has created another fantastic series and I'm really excited to see where it goes from here, I just wish we didn't have to wait a whole year for the next instalment. I'm a greedy reader like that though and I'm incredibly pleased that we have a new Chicagoland Vampires book (& novella!) to look forward to in the meantime!