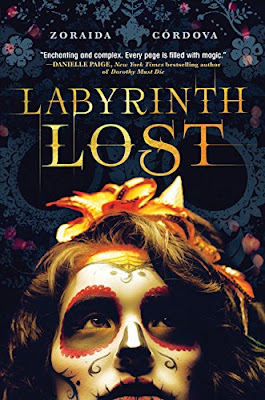 Nothing says Happy Birthday like summoning the spirits of your dead relatives.

I fall to my knees. Shattered glass, melted candles and the outline of scorched feathers are all that surround me. Every single person who was in my house – my entire family — is gone.

Alex is a bruja, the most powerful witch in a generation...and she hates magic. At her Deathday celebration, Alex performs a spell to rid herself of her power. But it backfires. Her whole family vanishes into thin air, leaving her alone with Nova, a brujo boy she can't trust. A boy whose intentions are as dark as the strange marks on his skin.

The only way to get her family back is to travel with Nova to Los Lagos, a land in-between, as dark as Limbo and as strange as Wonderland...

Review:
Alex is a powerful bruja from a family of witches but she's absolutely terrified of her magic and she's very resistant to the idea of using it. She blames magic for the disappearance of her father and unlike her sisters she doesn't want to accept her heritage. As her sixteenth birthday approaches her family arrange her Deathday celebration (a coming of age ceremony where her dead ancestors will appear to give her their blessing) but Alex has other plans. Unfortunately when Alex tries to reject her magic she manages to send her entire family (both past and present) into Los Lagos, a magical land of lost souls and strange creatures. Alex didn't want to accept her gift but that doesn't mean she wanted to lose her family so now has to find a way to put things right again.

I knew I had to read Labyrinth Lost the minute I saw the cover, I know very little about Latin American mythology so I was really excited to come across something so different and after reading the blurb I was really looking forward to getting lost in a world of brujas, brujos and Deathday celebrations. I have to say that side of the story was done brilliantly, I enjoyed seeing Alex's struggles to accept her abilities and I enjoyed seeing how the sisters worked together to create their Cantos. It was when they were transported to Los Lagos that the world building really excelled, it was very reminiscent of falling down the rabbit hole with Alice but Zoraida Cordova has created a world full of creatures I've never heard of before and I thoroughly enjoyed exploring it.

Where things fell down for me was with the characters, I love that the main characters are so diverse and I really loved that the fact Alex is bisexual is treated as something so completely normal but I just found it very hard to connect with most of the characters. Alex started to irritate me with her selfish attitude, Nova (the male love interest) was a brooding, secretive and mysterious but he doesn't stand out from the hundreds of other bad boy love interests I've read about over the last few years, then you have Alex's best friend Rishi (the female love interest) who served absolutely no purpose in the story other than to be a third point on the triangle.

Let's face it most of us are sick of triangles these days, I don't think I've ever heard an avid reader saying "I wish I could find more books with love triangles" because it's harder to actually find a YA series without one! I can be won over if the triangle is done exceptionally well but in this case it just wasn't. Giving Alex a both male and female love interests isn't enough to make it interesting, especially when Rishi's character could be removed from the story altogether and pretty much nothing about the plot would have to change. Her character is so disposable that it makes the triangle completely worthless and even more irritating.

There is definitely potential there for the Brooklin Brujas series and I'm pretty sure I'll give the next book a try to see what happens to these characters next but I'm really hoping the triangle is resolved quickly or at least that both love interests actually have a role of their own as the series continues.