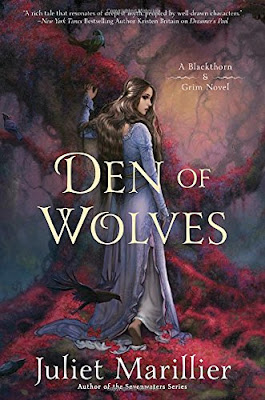 The “powerful and emotionally-charged” fantasy series from the author of the Sevenwaters novels continues, as Blackthorn and Grim face haunting secrets and old adversaries...

Feather bright and feather fine, None shall harm this child of mine...

Healer Blackthorn knows all too well the rules of her bond to the fey: seek no vengeance, help any who ask, do only good. But after the recent ordeal she and her companion, Grim, have suffered, she knows she cannot let go of her quest to bring justice to the man who ruined her life.

Despite her personal struggles, Blackthorn agrees to help the princess of Dalriada in taking care of a troubled young girl who has recently been brought to court, while Grim is sent to the girl’s home at Wolf Glen to aid her wealthy father with a strange task—repairing a broken-down house deep in the woods. It doesn’t take Grim long to realize that everything in Wolf Glen is not as it seems—the place is full of perilous secrets and deadly lies...

Back at Winterfalls, the evil touch of Blackthorn’s sworn enemy reopens old wounds and fuels her long-simmering passion for justice. With danger on two fronts, Blackthorn and Grim are faced with a heartbreaking choice—to stand once again by each other’s side or to fight their battles alone...

Review:
I have absolutely loved Juliet Marillier's Blackthorn and Grim series, it really has got better with every book and as much as I'm sad that we've reached the end the last instalment Den of Wolves was everything I could have hoped for.

This story is a little different to the previous two because Blackthorn and Grim spend a lot of their time apart from each other. Grim has agreed to take on a difficult building job and it means working a lot of long hours and coming home late at night and exhausted. While Grim is busy at Wolf Glen Blackthorn is helping to take care of a scared young girl who has been sent to court by her father to learn how to be a lady. As you might expect from this series there is a lot more to the story than that, Blackthorn and Grim are both uniquely qualified to solve the mystery surrounding Wolf Glen and the heartwood house but it's not going to be an easy task.

I don't really want to talk about that side of the plot though, instead I'm going to focus on the main characters and how much I've loved seeing them grow throughout the series. Blackthorn is still a prickly and stubborn woman, she's suffered too much and it's left her very defensive and wary of letting people in but we've watched as she slowly started to enjoy practising her craft as a healer again and she's definitely come a long way since the first book. I remember in the beginning that she thought of Grim as nothing but a nuisance but we've seen first hand how her feelings have started to change and in this book that old adage absence makes the heart grow fonder really comes into play. It's only when Blackthorn is left to cope without Grim being around that she realises how much she has come to rely on and care for him.

On Grim's part we've known he was in love with her for a long time now but he's finally brave enough to lay his cards on the table and risk their friendship in the hope of gaining something much more special. Blackthorn definitely has some difficult choices to face in this book. She needs to decide if she's brave enough to open her heart again in spite of the risks that entails and she also has a chance to finally get her revenge on Mathuin but it may cost her more than she is willing to pay.

I have to admit that I was expecting more books in this series and I'm still hoping the author may decide to revisit these characters again in the future but I thought she did a brilliant job of tying all the loose ends together so we're not left with unanswered questions. I love both of these characters and I've enjoyed every minute of their story so it's been sad to say goodbye to them but I'm glad the series has reached a fitting end. This is a series I know I'll be rereading again in the future but in the meantime I'm going to start working my way through Juliet Marillier's backlist.