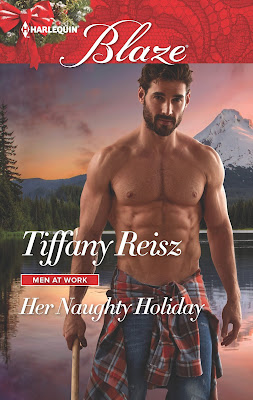 A feast she wasn't expecting!

Clover Greene would sooner crawl into her oven than host family for Thanksgiving dinner. Yet another annual ritual of too much food, served with a side of criticism over "Clover's Bad Life Choices." This year, she needs to distract them all - with a handsome fake boyfriend. And she has the perfect guy in mind.

Contractor Erick Fields is the poster boy for sexy single dads, and Clover has been secretly crushing on him for ages. She certainly wasn't expecting Erick to agree to her insane charade . . . or to add lots of hot, wicked sex to the deal. If they can pull it off, the worst Thanksgiving ever might give them both something to be really thankful for!

Review:
Clover is absolutely dreading hosting her family for Thanksgiving dinner, she built her own successful business and loves her life but her family are constantly criticizing her for not living up to their expectations. As far as they're concerned until she gets married and starts pushing out a few grandkids she's a complete failure. This year, thanks to some meddling on the part of her teenage assistant Ruthie, she decides she needs to find a fake boyfriend to help take some of the heat off. Ruthie thinks her dad is the perfect man for the job so she sets the two up before heading off to spend the holidays with her mother. Erick has been interested in Clover for over a year now but always considered her out of bounds because she works with his daughter, now that Ruthie has given him her blessing all bets are off though and he's more than happy to act as Clover's fake boyfriend - until he can convince her that he makes a much better real one.

I'm having so much fun reading this series, it's full of hilarious banter, great characters and hot sex so what's not to love? Tiffany Reisz excels at writing believable romances with characters you either fall in love with or want to be best friends with (possibly both at the same time!). Clover and Erick make such a great couple, they're both such caring personalities and their romance was incredibly sweet but they have amazing chemistry too and the sparks fly pretty much immediately. I loved the relationship they both had with Ruthie and she was a fantastic side character who added a lot of humour to the story.

Although Clover and Erick have both been crushing on each other for a long time I liked that they hadn't made a move on each other because they were worried about how Ruthie would be affected, Clover obviously cares a huge amount for Ruthie and she's going to make a fantastic step-mum. Erick and Ruthie's relationship was brilliant too and I loved that he was a single dad who did most of the full time parenting, he obviously has a very strong bond with his daughter and they had a lot of fun teasing each other.

I wasn't impressed with Clover's family though, they were all so mean to her and very snobby and judgemental when they first met Erick. I got really angry with the comments they kept coming out with and the way they kept putting Clover down so it was absolutely brilliant seeing her finally stand up for herself and I loved the way Erick had her back too. He wasn't shy standing up to her entire family in her defence and he did it in a way that showed them how completely unreasonable they were being.

Her Naughty Holiday was another fabulous read and I'm sure I'll be digging this series out every year for a little sexy holiday reading. I can't wait for December so I can pick up the last book in the series!