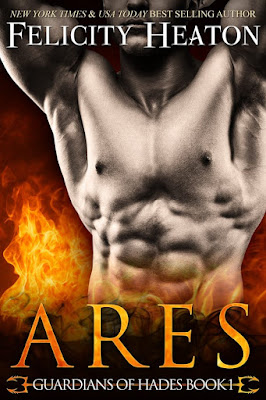 Prince of the Underworld and Lord of Fire, Ares was banished from his home by his father, Hades, two centuries ago and given a new duty and purpose—to keep our world and his from colliding in a calamity foreseen by the Moirai.

Together with his six brothers, he fights to defend the gates to the Underworld from daemons bent on breaching them and gaining entrance to that forbidden land, striving to protect his home from their dark influence. Caged by the manifestation of his power, held apart from those he loves by his own fire and starved of physical contact, Ares lives a cold existence driven by duty and the desire to return to his world.

Until his world collides with a daemon who steals his power and a mortal female who shatters the ice around his heart and awakens the true fire within him—a soul-stirring passion both dangerous and seductive.

Megan has wandered far from her home, driven from everyone she loves by the devastating realisation that she is different to them all. Unsure who to trust in the world, she keeps to herself, until a fateful stormy night brings a temptingly handsome warrior crashing into her life and into her heart—a warrior who seems to hold powers more frightening and marvellous than her own.

When the New York gate comes under threat, and Ares is put to the test, will he choose his duty and regain the power he needs in order to save his world or will he choose the desires of his heart and sacrifice his fire so he can be with the woman becoming his whole world?

Review:
Seven brothers, Princes of the Underworld and children of Hades and Persephone who have been tasked with guarding the gates between our world the theirs - meet the Guardians of Hades. In Felicity Heaton's brand new paranormal romance series you'll get to know all these brothers and watch them fight to protect our world from a disaster that was prophesied by the Moirai.

Ares is able to control the element of fire, it makes him a powerful warrior but it comes with a very dangerous side effect. He runs at a much higher than average temperature which makes it impossible for people, even most of his brothers, to touch him and if he loses control he sets fire to anything around him. For the two centuries he has been on earth protecting the gateways his powers have isolated him from the people around him, just imagine a life where you can't even shake people's hands without giving them third degree burns. He has closed himself off from everyone apart from his brothers and just wants to do his duty by protecting the gates and fighting against the daemons who want to fulfil the Moirai's prophecy.

The last thing Megan expected to happen when she takes a shortcut home one night is to get caught in the middle of a battle between two superhuman warriors. She doesn't get a chance to run for safety and when one of the warriors is injured while protecting her she has to do what she can to heal him. Megan has been alone for a long time thanks to a secret ability she has been hiding from everyone and after seeing Ares fight she thinks he might be the only person who can answer her questions about where her power came from.

Drawn together by a common enemy Ares and Megan must work together to try and figure out what the daemon has planned for them. Ares' powers have been stolen and for the first time in centuries he is able to touch and be touched but unless he can get his powers back he can't protect the gateway and the world as we know it could be destroyed.

This is a fabulous start to a new series and I can't wait to get my hands on the next instalment. Felicity Heaton always creates such brilliant heroes and she's done it again with Ares and his brothers! The seven men each have different abilities and personality quirks and I'm looking forward to getting to know them all better. I'm struggling to decide who I like best which is great as I think I'm going to enjoy all of their stories. The romance between Ares and Megan is hot and steamy in all the best ways and I enjoyed seeing Megan learn to adapt to his world. I did think their relationship got serious a little too quickly but I was easily able to ignore that because I was enjoying the characters and the rest of the story so much. This series has definitely left me wanting more and I'm looking forward to getting my hands on Valen's book next year.