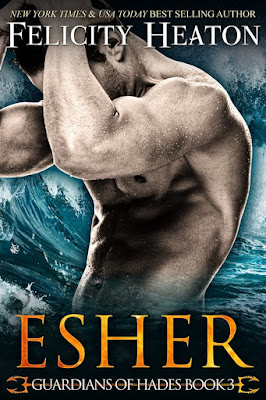 Prince of the Underworld and Lord of Water, Esher was banished from his home by his father, Hades, two centuries ago and given a new duty and purpose-to keep our world and his from colliding in a calamity foreseen by the Moirai.

Together with his six brothers, he fights to defend the gates to the Underworld from daemons bent on breaching them and gaining entrance to that forbidden land, striving to protect his home from their dark influence. Tormented by his past, Esher burns with hatred towards mortals and bears a grudge against Hades for forcing him into their world, condemning him to a life of battling to keep a fragile hold on his darker side-a side that wants to kill every human in the name of revenge.

Until he finds himself stepping in to save a female-a beautiful mortal filled with light and laughter who draws him to her as fiercely as the pull of the moon, stirring conflict in his heart and rousing dangerous needs long forgotten.

Aiko knows from the moment she sets eyes on the black-haired warrior that he is no ordinary man, just as she's no ordinary woman. Blessed with a gift, she can see through his stormy façade to the powerful god beneath, and the pain and darkness that beats inside him-pain she grows determined to heal as she falls deeper under his spell and into his world.

When the daemon bent on turning Esher against his brothers makes her move, will Esher find the strength to overcome his past and fulfil his duty, or will the lure of revenge allow the darkness in his heart to seize control, transforming him into a god intent on destroying the world?

Review:
I love a tortured hero so I've been looking forward to Esher's story ever since Felicity Heaton started the Guardians of Hades series. We never knew much about his background from previous books but we do know he has serious issues and has a bad history with humans in general. His brothers help him keep his powers under control but he definitely has a dark and dangerous side that they're all wary of. We find out a lot more about what actually happened to him in this book and its easy to understand why he's bitter about being given the task of protecting the human realm.

Aiko is probably the softest of the heroines we've met so far but she was just what Esher needed, she's not a warrior like Eva or a healer like Megan but she is aware of the supernatural because of her ability to see ghosts and spirits. She recognises immediately that Esher is a god and that fact never worries her, she just accepts him for who he is and gives him the care and love that he so badly needs. Esher has always kept his brothers at a distance but Aiko gets under his skin and breaks down his protective barriers in a way that nobody has ever managed before. I mentioned that Aiko is the softest of the heroines in this series but don't take that to mean that she's a doormat or incapable of fighting for what she wants. She may not be trained for battle but she has the strength she needs to stand at Esher's side as a partner.

The ongoing storyline with the daemons who have been plotting against the brothers is really hotting up here too so alongside the romance there is plenty of action and lots of new information to unravel. We also get to know each of the other brothers a bit better and I'm really curious to see whose story is up next, I'm actually getting excited about all of them now so I'm sure I'll be happy whoever takes the lead. This series is a lot of fun and I'm looking forward to seeing where it takes us next.