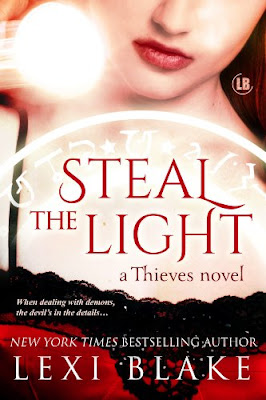 When dealing with demons, the devil’s in the details…

Stealing mystical and arcane artifacts is a dangerous business, especially for a human, but Zoey Wharton is an exceptional thief. The trick to staying alive is having friends in all the wrong places. While having a witch and a werewolf on the payroll helps, being partners with a vampire really opens doors.

Zoey and Daniel were childhood sweethearts until a violent car crash took his life and left her shattered. When Daniel returned from the grave as a vampire, his only interest in Zoey was in keeping her safely apart from the secrets of his dark world. He has vowed to protect her, but his heart seems as cold as the night he calls home.

Five years later, a mysterious new client named Lucas Halfer offers Zoey a fortune to steal the Light of Alhorra. The search for the Light leads Zoey into the arms of an earthbound faery prince. Devinshea Quinn sweeps her off her feet, showing her everything the supernatural world has to offer, but Daniel still calls to her heart.

As the true nature of the Light is revealed, Zoey discovers Halfer is a demon and much more than money is at stake. Per her contract, she must give him the Light or spend an eternity in Hell. What’s a girl to do except fight for her soul…and her heart.

Review:
Zoey is a thief who specialises in stealing arcane artefacts, as the only human on her crew she often finds herself in dangerous situations but she's usually quite good at getting out of them too, especially with the help of her vampire ex-fiancé and the witch and werewolf they work alongside. That is until the day she is tricked into signing a contract with a demon and now her very soul is at risk.

I'm fairly new to Lexi Blake's writing, I've recently been devouring her rereleases of the books she previously published under the pen name Sophie Oak and when I realised she also had an urban fantasy series (one of my favourite genres) I just had to dive in. Steal the Light was a fab start to the series and I plan to devour the rest as soon as possible.

Zoey had her heart broken when her fiancé and childhood sweetheart, Daniel, died in a car crash. She was overjoyed when he came back as a vampire but then he was dragged away by the vampire council and when he returned two years later he wasn't the man she knew and loved. Zoey still desperately loves him but Daniel keeps her at arm's length and insists that there can be no future for them other than friendship. They work together and make a good team but Daniel's heart is completely closed off from her. When they are tricked into searching for a fae artefact for a demon the job leads Zoey to faery prince Dev and for the first time she finds herself attracted to someone other than Daniel. Romance is complicated though and she really should be focused on getting the demon off her back and saving her soul.

Normally I shy away from books with even a hint of a love triangle in them, it's a trope that has been done to death in UF and it's one I'm really sick of reading about but knowing Lexi Blake's penchant for writing menage stories I'm kind of hoping that this one will have a much different outcome to most! I actually thought the triangle was handled really well here and I have a hard time deciding which of the guys I like most. There is a lot of history between Zoey and Daniel and you can feel how much she loves him, he has always been the centre of her world but the new, brooding and secretive vampire is not the Daniel she fell in love with and he refuses to let her get close to him again. Dev, on the other hand, is far less complicated. He is warm, funny and leaves Zoey in no doubt that he is attracted to her. Dev gives her the attention she has been craving for such a long time and he makes it all so easy.

We know all along that Daniel is keeping things from Zoey but I have to admit I was angry with him when the depth of his deception was revealed towards the end of the story. I know he was trying to protect her but I hate it when people keep important things hidden from their loved ones so I could understand why Zoey felt so betrayed and I wasn't at all surprised by how things played out. I'm hoping that we'll see him start to redeem himself in future books though and I'm also looking forward to learning more about Dev.

Steal the Light has great main characters, plenty of humour, lots of action and all the heat you'd expect from a Lexi Blake book so I'm definitely looking forward to reading the rest of the series.