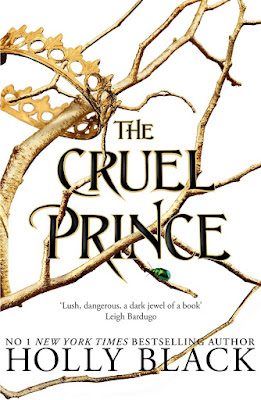 By #1 New York Times bestselling author Holly Black, the first book in a stunning new series about a mortal girl who finds herself caught in a web of royal faerie intrigue.

Of course I want to be like them. They're beautiful as blades forged in some divine fire. They will live forever.

And Cardan is even more beautiful than the rest. I hate him more than all the others. I hate him so much that sometimes when I look at him, I can hardly breathe.

Jude was seven years old when her parents were murdered and she and her two sisters were stolen away to live in the treacherous High Court of Faerie. Ten years later, Jude wants nothing more than to belong there, despite her mortality. But many of the fey despise humans. Especially Prince Cardan, the youngest and wickedest son of the High King.

To win a place at the Court, she must defy him--and face the consequences.

In doing so, she becomes embroiled in palace intrigues and deceptions, discovering her own capacity for bloodshed. But as civil war threatens to drown the Courts of Faerie in violence, Jude will need to risk her life in a dangerous alliance to save her sisters, and Faerie itself.

Folk of the Air Series:
The Cruel Prince
The Lost Sisters (Novella)
The Wicked King (2019)
The Queen of Nothing (2020)

Review:
Jude and her twin sister Taryn are humans who have been raised in Faerie, officially they are the adopted daughters of Madoc, the Red Cap General of the High King's army, and the person who murdered their parents when he came to take back his real daughter, their half-sister Vivi, but unofficially they are looked down on by everyone because of their mortality. Jude is sick of being bullied because the fae think they are better than her and she is determined to do whatever it takes to prove them wrong and take her revenge for the way they have behaved.

The Cruel Prince is one of those stories that starts out a little on the slow side but it gradually sucks you into the world that Holly Black has created and before you know it you've reached the end and find yourself desperate for the next instalment. I've not read this author's previous fae series but I'm definitely going to change that because she sure knows how to write the deliciously dark and devious fae that wouldn't make it into a Disney movie. These are Grimm's fae, ones who love to play games with humans and think nothing of hurting others purely for their own enjoyment.

Jude herself isn't always the easiest character to like, she is so totally set on her revenge that she can be quite cruel in her own right and she revels in proving that she can be just as bad as any of the fae. I found it pretty easy to see where she was coming from though, she didn't choose to be taken to faerie as a child and she's been surrounded by this amazing world and these supremely powerful beings for her entire life but she always has to look on as an outsider, she's never been accepted as part of things and it's made her jealous and more than a little bitter to be treated so cruelly. Even when I didn't like her actions I couldn't hate her character and I routed for her far more than anyone else we met.

I was a little disappointed that the bond between the twin sisters wasn't stronger but Taryn reacts to things in a totally different way to Jude. Rather than fight to prove her own power Taryn just wants to find someone else who can offer her protection and she just desperately tried to fit in. I actually found her pretty weak and I was really angry about the way she treated Jude most of the time. Their older sister Vivi was the voice of reason in the family, she's half-fae and fully accepted as her father's heir so she has a lot less to deal with than the twins but she wants as little to do with faerie as possible.

There is a lot going on in this story, I had actually guessed a couple of the biggest twists well before they were officially revealed but that didn't stop my enjoyment and the ending left me fully primed for the sequel. This was a brilliant start to the new series and I'm definitely planning on checking out Holly Black's other fae stories while I wait for the next book in the series.