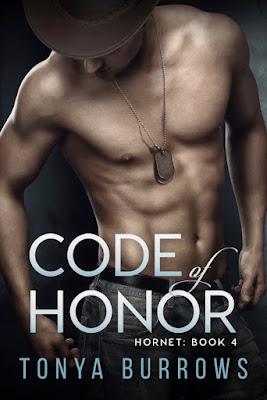 Jesse Warrick used to consider himself a kickass medic, but a teammate’s brush with death has him questioning everything. Now he’s been promoted to field commander of HORNET. How can he lead when he can’t get his shit together? And how can he focus when the sexy new recruit makes him want to break the rules?

Lanie Delcambre can’t seem to find solid footing within the elite hostage rescue team. Worse, the man she’s loved for most of her life is now her boss. She’d kill to act on the chemistry between her and Jesse, but she can’t risk ruining her career.

It was only supposed to be a training mission. No live ammo, no hostages, and no real bad guys—only someone didn’t give the bad guys that memo. When their hotel is taken hostage with half of HORNET inside, Jesse and Lanie are the team’s only hope of escaping alive...

Review:
Jesse is the HORNET medic who has saved the life of several members of the team but he can't get over the death of one of his own and the guilt is eating away at him and knocking his confidence. Throw in the distraction caused by his estranged fifteen year old son coming to live with him, his growing attraction to fellow team member Lanie and his promotion to field commander and something has got to give. Lanie has been friends with Jesse's cousin for years and she fell in love with him when they were still children, he broke her heart when they were teenagers but she's never gotten over her crush on him so working in close contact is torture. When a training mission goes horribly wrong and half of the team end up being taken hostage it's up to Jesse and Lanie to get them all out alive. To do that they have to put their feelings to one side but in a high adrenaline situation things are about to come to a boil.

I've loved Jesse ever since I first started reading the HORNET series so I was really looking forward to his book. He's always been the light hearted joker of the group but recent events have changed him and he just can't get past the fact a team mate died on his watch. It was heartbreaking for all of the team but Jesse has taken it even harder because he just keeps thinking that there should have been something he could have done to save him. He has a history of depression and is close to being dragged back down into a dark abyss by his demons but his son and his team need him so he's trying really hard to fight for them. I really enjoyed the romance between him and Lanie, they have history but it was all fairly innocent so there is no bitterness or sense of betrayal between them - it's all about unexplored lust and long term friendship instead which I loved.

The beginning of this story was a little slower than previous books in the series but that was to give us a chance to catch up with some of the previous couples and to get a feeling for the amount of history there is between Jesse and Lanie. We also get to meet Jesse's son Connor who added an interesting dimension to the story. Once half the team is taken hostage the action takes of at an accelerated pace as Jesse and Lanie work together to try and get everyone to safety. I really enjoyed the suspense side of this story and it's all set to continue straight into the next book Reckless Honor where Jean Luc is set to take the lead.