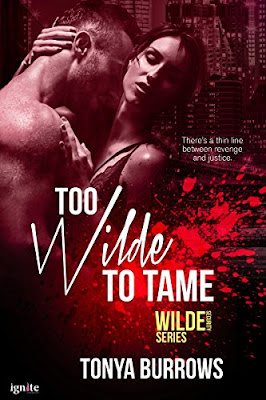 For three years, ballet teacher Natalie Taggart has lived across the hall from grumpy, reclusive, sexy Greer Wilde. Save for a handful of hellos and the occasional heated glance, they never spoke to each other.

Until the morning Greer lands on her doorstep, bleeding, beaten, and bullet-riddled.

Greer doesn’t need or want her help. He has only one goal: revenge. And nobody—not his brothers, and certainly not his too-hot-for-his-sanity next-door neighbor—is going to get in his way.

Review:
I've been looking forward to Greer's story ever since we first met the Wilde brothers, as the oldest he was the one who managed to keep the family together after their parents died and that's a lot of pressure to put on the head of one sixteen year old boy. You might wonder how a teenager managed to get custody of four younger siblings and keep a roof over their heads, well in this story we find out that and so much more. Greer gave up everything to keep his brothers safe and happy and he's been paying the price of that alone for years working black ops for a secret arm of the military.

If you've read the previous books you'll know that Greer has been missing for months and his brothers are going out of their minds looking for him. It all started with a mission that went to hell and it ended with a lead that could take Greer right to the person who murdered their parents. Of course that's if he lives long enough to confront the culprit which is looking less and less likely as he comes under attack from all angles.

Natalie is Greer's neighbour but she's never really spoken to him apart from to exchange a few hellos, she has been keeping an eye on his place for his brothers but the last thing she expects to find on her doorstep is a battered and beaten man who refuses to let her take him to the hospital. Natalie is at a loss, she can't leave Greer alone and injured but she doesn't know how to help him without calling for reinforcements.

I loved this story, I've waited such a long time to find out what was going on with Greer and it was definitely worth the wait. He's had the weight of the world on his shoulders since he was so young but he has helped to raise four incredible men so you just know he is going to be an amazing guy himself. Natalie has been through her own struggles and she isn't willing to put up with any of Greer's crap which I really appreciated. She called him out when he said or did something stupid and I think he needed someone like that in his life. There were also some great family bonding moments with him and his brothers and I really appreciated seeing them all living their own happily ever afters. This was a fab ending to the Wilde Security series but I'm glad we have a few more HORNET books to go and I'm hoping we might see a few of the brothers pop up as side characters occasionally.