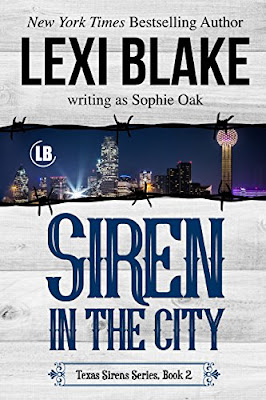 Jack and Sam married Abby. It was supposed to be for forever, but lately Abby wonders where her alpha male has gone. Jack has retreated and life has become decidedly vanilla. It isn't the true marriage she and Sam wanted. Sam and Abby know the time has come to fight for what they need.

A call from his mentor forces Jack to revisit the club where he discovered his sexuality. Jack's half-brother is in the city and interested in a little blackmail. Can Jack handle two defiant subs and a brother in need of some tough love?

Sometimes all it takes to find the way home is a little love and a lot of mischief.

Come back to the beginning and revisit some of your favorite old characters or find new ones to love. Siren in the City has been revised and new scenes added. And if you look closely, you’ll find not only the beginnings of the Sophie Oak world, but also the seeds of how McKay-Taggart began...

Review:
I really enjoyed the first book in this series, Small Town Siren, but as I mentioned in my review I did feel the relationship between Abby, Jack and Sam felt a bit rushed so I was really happy to see that Siren in the City continues their story. This review will contain spoilers for the first book so if you're new to the series you should look away now.

About six months on from events at the end of the first book Jack is almost physically recovered from being shot but he's a long way from emotionally recovering. To be fair, Abby and Sam also still struggle to deal with what happened and how they nearly lost Jack but their fear has brought them closer together while Jack has started to keep his distance. Gone is the domineering man they love and in his place is someone who avoids spending time with them and no longer seems interested in playing games in the bedroom.

I thought Lexi Blake did a brilliant job of showing the huge effect that Jack's PTSD is having on their relationship. Coming so close to dying has made him terrified of losing Abby or Sam and he's scared that they'll eventually get sick of his controlling nature so he's trying really hard to be what he thinks they need. All Abby and Sam want is the old Jack back but they're finding it hard to get through to him and explain how they're feeling. When Jack gets a call from his mentor, BDSM club owner Julian Lodge, and has to go into the city to help him resolve a little blackmail issue, Sam and Abby take the opportunity to remind him what he's been missing out on for the last few months.

This is the story where we really see this group's emotional connection grow to match their physical one. Some of the events in the club were a little far fetched but I really enjoyed seeing Abby push her boundaries and all three of them getting their relationship back on track. I also really enjoyed meeting Julian as well as Jack's younger half-brother so I'm looking forward to spending more time with them in later books. This series has definitely been a fun one so far and the heat levels were higher than ever in this instalment.