Review: Once Upon a Time in Bliss - Lexi Blake 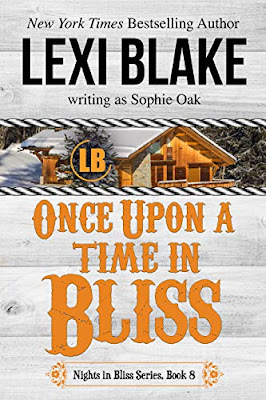 Go back in time to Bliss’s first happily ever after…

CIA operative John Bishop arrived in Bliss, Colorado, seeking a respite from the high-stakes game of blood and lies that sent him to the worst corners of the world. A week playing the role of vacationing professor Henry Flanders would recharge his batteries, especially if he found a gorgeous woman to occupy his time.

Nell Finn has spent her life focused on helping others, but when she meets the tall and mysterious Henry Flanders, she can’t stop imagining what he might do for her. When Nell and her mother are threatened, Henry comes to her, offering his protection and comfort.

But as the threats escalate out of control, Henry discovers that the beautiful and innocent Nell is much more than a plaything. Can he save the woman he loves without exposing the secrets that would drive her away?

Review:
Once Upon a Time in Bliss is book 8 in the Nights in Bliss series but it's also kind of a prequel. Nell and Henry have been some of my favourite side characters since the beginning of the series so I loved this chance to go back in time and see how they first met. It was also great to see younger versions of so many of the characters we've already met and love, in particular Logan and his best friend Seth shine in this story and as their book is next this was the perfect introduction to them (I think this is the first time we've seen Seth on page but I could be wrong about that).

Anyway, lets get back to our main couple and discuss the romance. Nell has been such a fun character throughout the series, she's a bit hippy in her attitude, very much a free spirit who cares deeply about the people and the world around her. She's constantly picking causes to protest over but when the chips are down she's definitely someone you want on your side because she's fierce when it comes to looking out for her own. Henry is a much quieter and more serious type, he's happy to indulge Nell in her crazy whims but not likely to join her in her protests. Instead he watches proudly from the sidelines making sure she doesn't get into too much trouble. We know from his actions in previous books that there is a darker side to Henry but Nell definitely brings out the best in him.

This story gives us a chance to get to know more about Henry's past as a CIA operative. He has a dark and bloody past but he's relieved to have left it all behind him now. When he first arrives in Bliss the last thing he was looking for was to settle down but he was definitely suffering with burnout from his job. Nell was someone so light and pure that the attraction was instant but he worried about tainting her with his past so it wasn't easy for him to start a relationship. In a lot of ways these two are total opposites but they work so well as a couple, she makes his world a much brighter place while he is able to shield her from the darker side of life and keep her happy.

I loved spending time with Nell and Henry but it was also fun seeing younger versions of characters like Max, Stefan, Callie and even Mel. I really enjoyed the friendship between Logan and Seth too so I'm looking forward to reading their book next. This series really is so much fun to read and I've enjoyed every minute of it.