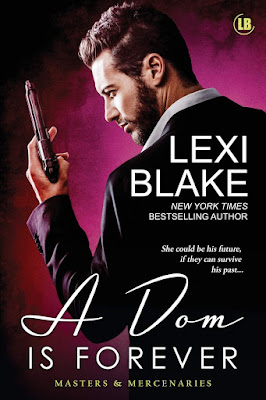 A Man with a Past…

Liam O’Donnell fled his native Ireland years ago after one of his missions ended in tragedy and he is accused of killing several of his fellow agents. Shrouded in mystery, Liam can’t remember that fateful night. He came to the United States in disgrace, seeking redemption for crimes he may or may not have committed. But the hunt for an international terrorist leads him to London and right back into the world he left behind.

A Woman Looking for a Future…

Avery Charles followed her boss to London, eager to help the philanthropist with his many charities. When she meets a mysterious man who promises to show her London’s fetish scene, she can’t help but indulge in her darkest fantasies. Liam becomes her Dom, her protector, her lover. She opens her heart and her home to him, only to discover he’s a man on a mission and she’s just a means to an end.

When Avery’s boss leads them to the traitorous Mr. Black, Liam must put together the puzzle of his past or Avery might not have a future…

Review:
The team are hot on the heels of Eli Nelson, the rogue CIA Agent they've been trying to bring down since the first book, and the chase has brought them to London where they believe Eli is working alongside wealthy philanthropist Thomas Molina. They need to get close to Molina to figure out exactly how he's involved and the best way to do that is via his assistant Avery. It's Liam's turn to go undercover but he has no idea that his past and present are about to collide and the explosion could be the death of him.

I've been looking forward to Liam's book, he's been a loveable rogue since the beginning of the series and I was dying to know more about him and how he ended up working at McKay/Taggart so I loved getting to learn more about his backstory. He left Ireland in disgrace after an op went south and several fellow agents were killed and he's been living under a cloud ever since, unable to remember the night it all went wrong and secretly worried that it was all somehow his fault. Liam never wanted to settle down and enjoys spending time with the single subs at the club but there is something about Avery's innocence that completely draws him in and when he falls it's hard and fast.

Avery is a woman who has lost everything not just once but twice, first when her parents died and then later when her husband and daughter were killed in a tragic accident. That kind of trauma could easily make her bitter but she's somehow managed to keep a sense of optimism and she's worked hard to build a life for herself. Sure, the last few years may all have been about her work but now she's feeling ready to put herself out there again and perhaps try dating. She has a connection with Liam from the very beginning and although she's wary of getting hurt again she won't let it stop her from fighting for what she wants.

I think what I loved most about Liam was that when he realised how deep he'd fallen he went against the team to tell Avery the truth about who he was and why he was in London. The one thing I've not liked about the previous two books was how the guys were keeping secrets for such a long time so I loved Liam risking it all because he trusted Avery and knew she couldn't possibly be involved with anything dodgy. That earned him extra bonus points with me for sure. I thought Liam and Avery were great together, yes their relationship moves fast, and yes she does willingly jump into the lifestyle very quickly but for a lot of reasons these two just fit and I enjoyed spending time with them.

I also love the action in this series, there are always lots of things going on with the team and the rogue CIA agent they're chasing but this time around we also get to see a lot of Liam's past and learn a bit more about Ian's marriage too. There were definitely a few surprises along the way that left me really excited to continue reading this series.