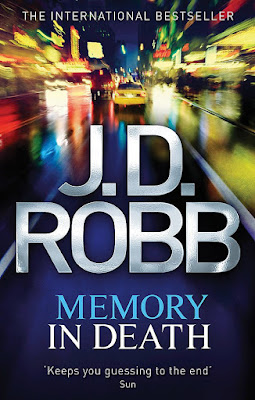 Cold rimmed her belly, frosted its way up to her throat. She couldn't breathe through the ice of it. Fear scratched at her throat. 'How did you find me?'

Nothing shocks Eve Dallas. As New York's most prominent and headstrong homicide Lieutenant, she's seen everything. But when someone from her past shows up - someone sickly sweet and viciously cruel - Eve panics.

Foster carer Trudy Lombard spent years traumatising the young and the vulnerable. To the tough, aggressive Eve, these memories cut deep. So when Trudy is found lying dead in a pool of her own blood days after their meeting, Eve feels nothing. But the cop inside her vows to find the killer.

And all the while her memories torment her. . .

Review:
We're so used to seeing Eve on top of her game that it's quite disconcerting to see her knocked for six when a face from her past breezes into town. Trudy Lombard was Eve's first foster mother after Eve had escaped from her father and lets just say that it wasn't a pleasant placement. Eve had blocked the memories so she's thrown totally off stride when Trudy walks in expecting to be welcomed with open arms. Of course Roarke pegs it straight away that the woman is looking for a handout but Eve is so off balance that it doesn't even cross her mind until Trudy tries to blackmail them. Roarke comes straight back with a scathing putdown but that just makes Trudy angry and even more determined to get the cash she came for.

Then when Trudy is brutally murdered the very next day both Eve and Roarke are obvious suspects but luckily they have the perfect alibi as they were hosting a Christmas party attended by half of the police force at the time of death. Eve has very little sympathy for Trudy but that doesn't mean she won't do her job and track down her killer, she doesn't believe in vigilante justice no matter how much Trudy deserved what she got.

Memory in Death was another fab instalment to the series. It was strange seeing Eve so off balance and there was a moment when she took out her frustrations on Roarke but we really got to see how far she's come because she realised how unreasonable she had been and actually apologised to him. It's great to see how strong they are as a couple now and that she's finding it so much easier to show Roarke how much she loves him. I enjoyed seeing them spending their second Christmas together and building on the traditions they have started to create for themselves too, neither of them had much of a family growing up but they're doing a brilliant job of making one together now with a close group of friends.

Every time I finish a book in this series I want to dive straight into the next one but I'm trying to ration them out a little as I'm almost halfway through the series now. It's a good job J.D. Robb writes so quickly because I'm not looking forward to having to wait for the next instalment!