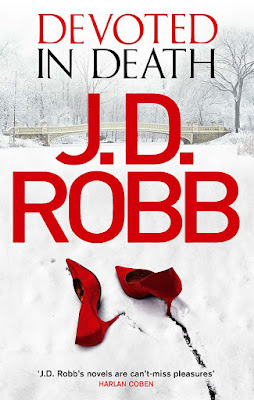 It's a new year in New York city, and two star-crossed lovers have just discovered an insatiable appetite...for murder.

Lieutenant Eve Dallas has witnessed some grisly crimes in her career and she knows just how dark things can get on the streets. But when a much-loved musician is found dead, Eve soon realises that his murder is part of a horrifying killing spree, stretching right across the country.

Now the killers have reached New York, and they've found themselves another victim. Eve knows she only has a couple of days to save a young girl's life, and to stop the killers before their sadistic games escalate. Eve's husband Roarke is ready to put his brains and his considerable resources behind the search. But even as the couple works closely together, time is running out...

Review:
Eve isn't usually involved in missing people cases but after her latest victim is linked to a pair of serial killers who seem to have murdered their way across the country she quickly realises that they've already moved on to their next target. Considering these killers like to take their time torturing their victims before they kill them there is a chance that Eve can save their most recent target, if only she can find them in time. With the help of Deputy Banner, a local who has been following them since they murdered one of his friends, Eve is determined to put a stop to the killing spree once and for all. They made a huge mistake by coming to her city and it'll be the last mistake they make.

Having read over 30 of the books and novellas in the In Death series in the last year alone I think it's fairly obvious to say that I've become a huge fan of Eve, Roarke and their friends. We actually saw less of the side characters in this book than most of the previous ones but that really didn't bother me. Instead we focused more on the killers and their cross country murder spree and I found the case really interesting. I loved Deputy Banner, he's been trying to get someone to listen to him about this case for weeks and has given up his own time to pursue the murderers across the country so he definitely has a vested interest in getting the case solved. He was more than happy to share info with Eve and they worked really well together to put everything together, she definitely wouldn't have solved this quite so fast without his help.

This is one of the books where we get to see parts of the story from the killer's point of view. Ella-Lou and Daryl definitely see themselves as some kind of modern day Bonnie and Clyde and they get off on causing as much pain and humiliation to their victims as possible. This made for some really uncomfortable reading, particularly as we see some of the story from their victim's point of view too. To be honest I could have done without quite so much detail when it came to the torture but I did really like the way the two victims worked together to try and stay alive no matter how much they were suffering. I'm still really loving this series and won't know what to do with myself when I catch up!