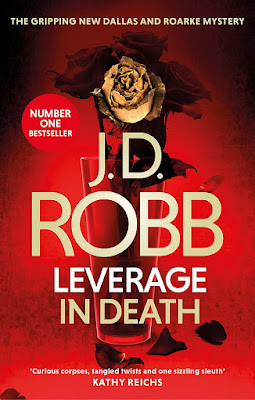 What would you do to protect your family?

When Paul Rogan sets off a bomb at his office, killing eleven people, no one can understand why. Then his wife and daughter are found chained up in the family home, and everything becomes clear. Rogan had been given a horrifying choice - set off the bomb, or see his loved ones suffer and die.

Lieutenant Eve Dallas is sure the violence won't end here. Working with her charismatic husband Roarke, she learns that the men behind the attack are determined, organised and utterly ruthless. Before they strike again, Eve must work out what they want and just how far they will go to get it...

Review:
When Eve is called to the scene of a suicide bombing nobody can understand why a well respected family man suddenly decided to kill eleven people. But then they discover his wife and child tied up in their home and it all becomes clear, Paul Rogan was given the terrible choice between setting off a bomb, killing himself and his colleagues, or watching as his family was tortured and killed. Paul did something unthinkable but at the same time he, and his family, were also victims and now Eve will be the one to get them justice. When a second bomb is detonated Eve quickly realises that the killers aren't going to stop but it's now a race to figure out who the next target could be and why.

It's no secret that I'm totally addicted to this series, I can't get enough of these books and I'm getting nervous now that I've nearly caught up to the latest release and I'm soon going to have to start waiting for the next release just like all the other fans of these books. It's great that J.D. Robb writes so fast but I can't believe I'm saying that 50 books is not enough for this series! Anyway, this was another interesting case and I loved that we got to spend so much time with Eve and Roarke in this one. They're such a fab couple and I love it when they're working together.

There were some really sweet / funny moments with Bella, especially her name for Summerset, but what I enjoyed most was seeing how far Eve has come in her friendships. This is the second book in a row where she goes out of her way to do something really special for Peabody and McNab and it's just not the kind of thing that Eve from book one would have ever thought about. The epilogue was brilliant, a great way for Eve to be involved with a certain celebration without having to step into the spotlight. I've already started reading the next book, there is just no stopping me at this point!