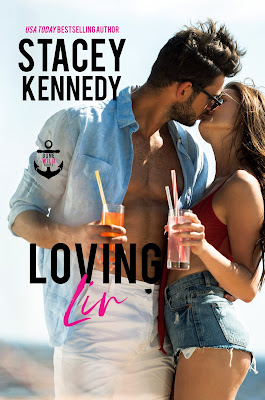 USA Today bestselling author Stacey Kennedy returns to the passion-filled world of Club Sin and Dirty Little Secrets with this novella featuring a slightly flawed Dom who has six days--and six very steamy nights--on a Caribbean cruise to convince an innocent woman from his past that maybe the best way for two broken people to find true love is to jump headfirst into the deep end of desire.

Liv Sloane needs a vacation. After her cheating ex broke her heart--and their engagement--Liv never fully recovered. In fact, she's spent the past two years avoiding romance at all costs... with the exception of that sizzling one-night stand she can't seem to forget. So when her friends from college suggest a reunion cruise, Liv knows a relaxing week of sun, sand, and beach reads is exactly what she needs to clear her mind. But when they board the ship, Liv is hit with two surprises. Her friends accidentally booked a singles cruise, and her one-night stand is waiting on deck.

Miles Schantz has spent the past three months thinking about Liv. As a Dom at one of the hottest sex clubs in Las Vegas, Miles has his pick of women... so why can't he get Liv out of his head? When he receives an email asking him to join Liv on a cruise, he can't believe his luck. But when he meets her on board--and she's completely unaware of her "invitation"-- Miles has to come up with a new plan. Six nights of no-strings-attached passion. Six nights of wild fantasies, sexy games, and forbidden adventures. Six nights to show Liv that she belongs with him...

Five friends. One singles cruise. So many sexy shenanigans. Be sure to check out all of the standalone Gone Wild books!

Dirty Little Secrets Series:
Bound Beneath His Pain
Tied to His Betrayal
Restrained Under His Duty
Cuffed by His Charm
Loving Liv (standalone title in the same world as the Club Sin & Dirty Little Secrets series, crossover with the Gone Wild series)

Review:
Ever since Liv had her heart broken by her cheating fiancé she's sworn off men so this trip to hang out with her closest friends should be just what she needs. What she wasn't counting on is running into Miles though, the hottest one night stand of her life and a man who has been trying to get her to date him ever since.

Miles hasn't been able to get Liv out of his head since their first encounter three months ago so when she emails him inviting him to join her on a cruise he jumps at the chance. He had no idea that it wasn't actually Liv who sent the email so they both get an unpleasant surprise when they first see each other again but now Liv is forced to spend time with him he's determined to make her see how good they could be together.

Loving Liv is the fifth book in the Gone Wild series containing books written by Stacey Kennedy, Katee Robert, Piper J. Drake, Avery Flynn and Robin Covington. Each of the books stars a different member of a group of old college friends who are on a cruise trip hoping to reconnect and spend time together. This has been a really fun series that's helped me find a few new (to me) authors to add to my to read mountain and I'm definitely planning on reading Stacey Kennedy's Club Sin & Dirty Little Secrets series as soon as possible.

This book was definitely the hottest of the series and I loved every minute of it. Liv is very attracted to Miles but she is so convinced their relationship couldn't possibly work that she isn't willing to give him a chance. She was badly burnt by her ex and is determined to never let herself get into that situation again. A relationship with Miles just makes no sense to her, not only is he a Dom who runs a sex club while she's totally vanilla, he's also so out of her league that it's ridiculous and they don't even live in the same state. Miles on the other hand thinks they'll be perfect together, he's spent enough time around beautiful women to recognise insane chemistry when he feels it and he knows that Liv isn't quite as vanilla as she thinks she is. All he's got to do is prove it to her.

I thought Liv and Miles made a great couple and their chemistry was insanely good, Liv had no idea how much she'd enjoy her time with Miles but she's still running scared. It's not going to be easy to convince her to give love another chance but hopefully she'll be brave enough to try. This book also has cameo appearances from quite a few couples from the Club Sin series as well as Allie and Micha from Bound Beneath His Pain which I'm sure fans will appreciate and it definitely made me want to read more of Stacey Kennedy's books in the future.