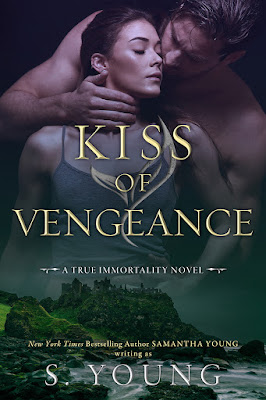 True Immortality Series:
(These stories are all stand alone and can be read in any order but they're in the same universe)
War of Hearts
Kiss of Vengeance

Review:
Fionn was an Irish warrior king who led his people in battle against the fae, when the war took a dangerous turn he sacrificed himself becoming consort to the Fae Queen to save his people. The queen turned Fionn fae as punishment, making him part of a race he despised, then, when he was finally able to escape and return home his people betrayed him. In the centuries since Fionn has had one goal in mind, finding a way to return to Faerie so that he can kill the Fae Queen and finally get the revenge he has been dreaming of.

Rose has never felt like she fitted in and she's never been able to settle in one place. For years she's wandered across Europe searching for something even though she's not really sure what she's looking for. Then one night she is attacked by a vampire and finds herself pulled into the world of the supernatural. Fionn offers to be her protection in this new world but Rose has no idea that he believes she is the key to opening the gates to Faerie and that he plans to use her to get his revenge.

While this story is set in the same world as War of Hearts, and Fionn did make a brief appearance in that book, Kiss of Vengeance also works well as a stand alone. Fans of the series will spot a few familiar faces along the way but I don't think it would be enough to make things confusing for new readers. They're great books though so I'd honestly recommend picking up both of them.

I really loved Rose as a character, she was new to the supernatural but she was by no means a push over. She'd been looking after herself for years and was more than capable of standing her ground when she needed to. She was really honest and open and definitely someone I could easily be friends with. Fionn was a strong and proud warrior who had been to hell and back. His backstory was tragic and he had been abused horribly at the hands of the Fae Queen so I had a lot of sympathy for him but I didn't like the fact that he was so willing to sacrifice an innocent just to get his revenge. Fionn and Rose had a spark and I found their bickering amusing but I found it hard to get on board with their relationship when he was keeping so many secrets and basically plotting to kill her for the majority of the book. You could see he was struggling with his feelings and that helped but I think I'd have liked him to be more upfront a little earlier in the story.

Overall I don't think I loved the romance quite as much as the first book but I still enjoyed the characters and the world building. I'm invested in this series and really hope that Niamh is going to be getting her own book soon.