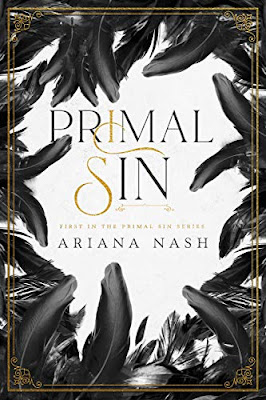 Fallen for love. Risen for revenge.

Severn knows love. He knows how it feels to fight for love, and have it torn from his reach. He knows that when the killing fields are strewn with the dead, and love is all gone, only one thing keeps his demon heart beating:

His life is now a web of lies. His act, a perfect one. His enemy, the guardian angel Mikhail, sits beside him, turns to him for guidance, and even loves him.

The time has come to make all the angels fall, beginning with the most powerful of them all.

Severn thought he knew love. But he’s about to discover that love takes no prisoners, and as demons and angels clash over London’s battle-weary streets, love will claim the souls of two destined enemies.

Primal Sin is a dark gay fantasy with a strong love-story. The series is brimming with savage desires, relentless lies and the bite of vengeance and is not for anyone easily disturbed by graphic scenes.

Review:
For decades angels and demons have waged war on the streets of London and the killing fields have left it unrecognisable. Angels live in the aerie, a huge towering structure ruled by Guardian Mikhail, and they consider themselves protectors of humans. Below the Aerie is the Cauldron, a dark and dangerous underworld where demons prey on the unsuspecting and anything can be purchased for the right price.

Severn is Mikhail's right hand man, a fierce warrior respected by the rest of the angels and feared by demons, even though he lost his wings in battle and can no longer fly. But while Severn is seen as an ally he has ulterior motives and has spent the last decade planning is revenge against the person he blames for ruining his life. After Severn is brutally injured in battle once more Mikhail takes surprising steps to save his life and the bond that forms between them could be enough to doom the world.

Ariana Nash never fails to rip out my heart and stomp it into teeny tiny pieces and I love it so much that I just keep coming back for more! Love, revenge, betrayal and heartbreak this book has it all and then some, I was hooked from beginning to end. We're only just starting to explore this world but already I want to know more and I enjoyed getting to know the characters too. Mikhail initially comes across as quite cold and unfeeling but under the surface he's a boiling pot full of emotion and in the end that might just be his downfall. Severn on the other hand is full of rage and hatred, and with very good reason, but he is also more than he originally seems and as his hate and lust combine his attitude completely changes.

I honestly can't wait to see what happens next between these two, especially now a certain new character that appeared at the end of the book has been thrown into the mix. I know for sure that this is going to be a bumpy ride for everyone but I can't wait to enjoy the rollercoaster.