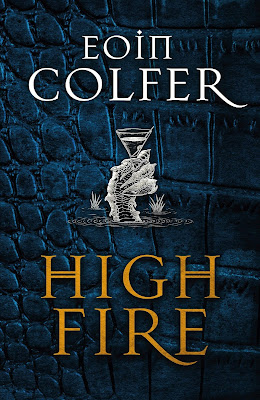 Highfire is a genre-bending tour-de-force of comedy and action by the million-copy-selling master storyteller.

Squib Moreau may be swamp-wild, but his intentions are (generally) good: he really wants to be a supportive son to his hard-working momma Elodie. But sometimes life gets in the way - like when Fake Daddy walked out on them leaving a ton of debt, or when crooked Constable Regence Hooke got to thinking pretty Elodie Moreau was just the gal for him . . .

An apprenticeship with the local moonshine runner, servicing the bayou, looks like the only way to pay off the family debts and maybe get Squib and his momma a place in town, far from Constable Hooke's unwanted courtship and Fake Daddy's reputation.

Unfortunately for Squib, Hooke has his own eye on that very same stretch of bayou - and neither of them have taken into account the fire-breathing dragon hiding out in the Louisiana swamp . . .

For Squib Moreau, Regence Hooke and Vern, aka Lord Highfire of Highfire Eyrie, life is never going to be the same again.

'Told in crunchy prose, with lashings of earthy dialogue, it reads like an Elmore Leonard Thriller, but with dragons . . . Colfer clearly had a blast writing this, and his sheer storytelling panache brushes aside the quibbles of fantasy-genre agnostics with infectious glee' Mail on Sunday

From the internationally bestselling author of the Artemis Fowl series: Eoin Colfer's first adult fantasy novel is a hilarious, high-octane adventure about a vodka-drinking, Flashdance-loving dragon who's been hiding out from the world - and potential torch-carrying mobs - in a Louisiana bayou . . . until his peaceful world's turned upside down by a well-intentioned but wild Cajun tearaway and the crooked (and heavily armed) law officer who wants him dead.

Review:
Highfire is being marketed as Eoin Colfer's first adult fantasy book but to be honest, apart from the swearing, excessive violence and chapters in the bad guy's point of view, the actual story felt pretty juvenile. I remember really enjoying the Artemis Fowl series when I read it years ago so I was really excited to see what this author would come up with for an adult audience, especially when I found out there would be dragons, but as much as I hate to say this I ended up feeling disappointed.

It took me a looooong time to read this book, I actually came very close to quitting and to be honest it probably would have been better to do that than force myself to get to the end. I found it impossible to connect with any of the characters, Squib was young and irritating, Vern (the dragon!) wasn't fleshed out enough (I still can't picture what he looked like, is he a giant dragon or is his shape more humanoid since he apparently likes wearing Flashdance t-shirts?) and the sections from the point of view of the crooked cop were just vomit inducing. Seriously, we have to be inside his head while he's thinking about raping Squib's mother or planning to kill her son because it will leave her vulnerable and he'll be able to take advantage of her. That's not all of the disgusting things he plans but it was far more than I needed to see first hand.

The humour completely missed the mark for me, it was all the kind of potty humour about bodily functions that you hear teenage boys giggling about. I'm sure others will appreciate it too but it just wasn't what I was hoping for when I picked up this story. I'm really struggling to think of anything I particularly liked about this book, it only really gets 2 stars because I finished reading it but that was a close run thing and I'd struggle to recommend it to anyone.