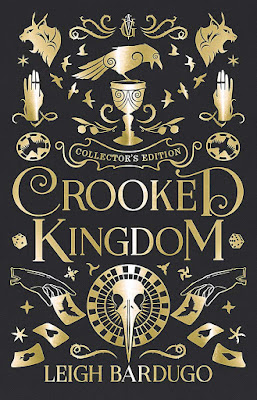 This beautiful hardback is a perfect gift for fans, or to discover the unforgettable writing of Leigh Bardugo before the Grishaverse comes to Netflix soon with Shadow and Bone, an original series.

Welcome to the world of the Grisha.

Kaz Brekker and his crew of deadly outcasts have just pulled off a heist so daring even they didn't think they'd survive. But instead of divvying up a fat reward, they're right back to fighting for their lives.

Double-crossed and badly weakened, the crew is low on resources, allies, and hope. As powerful forces from around the world descend on Ketterdam to root out the secrets of the dangerous drug known as jurda parem, old rivals and new enemies emerge to challenge Kaz's cunning and test the team's fragile loyalties.

A war will be waged on the city's dark and twisting streets - a battle for revenge and redemption that will decide the fate of the Grisha world.

As gripping, sweeping and memorable as the Grisha trilogy - SHADOW AND BONE, SIEGE AND STORM and RUIN AND RISING - this novel is perfect for fans of Sarah J. Maas, Laini Taylor, Kristin Cashore and GAME OF THRONES.

***** I've already posted most of this review before but I wanted to update it to include pictures of the absolutely GORGEOUS new Collector's Edition Hardback! *****

It's taken me a long time to write my review for Crooked Kingdom, probably because even though it's been over a month since I finished reading it I still can't quite decide whether I loved it or hated it. This was one of my most anticipated books of the year, I reread Six of Crows in anticipation and I dropped absolutely everything the second that Amazon delivered my copy so that I could dive back into this world. I know putting such incredibly high expectations on a novel isn't necessarily fair to an author but I loved Six of Crows so much that I just couldn't help myself and if you'd asked me at any point in the first 90% of Crooked Kingdom what I thought of it I'd have told you it was an absolutely phenomenal 10 star read. Up until that point it was everything I could possibly have hoped for and then some and I was utterly convinced it would be my favourite book of the year.

The plot was as twisted as you'd expect it to be, Kaz has plan inside plan inside plan until you have no idea what to expect next or how they're going to get out of their latest fix. The pace of the story is fast, everything that could go wrong did go wrong and half the time I was on the edge of my seat desperate to see how things would turn out. The character development was wonderful, we get to know Jesper and Wylan better which made me fall completely in love with both of them and there are some brilliant scenes between Kaz and Inej but it was Nina and Matthias who totally stole the show. I ship those two so hard and I just adored seeing how much Matthias has changed since the beginning of the first book. I had so many expectations about where their story was going and could almost write the spin off myself because I knew exactly where I wanted it to go.

Then it happened. I can't go into details because of spoilers but I'm pretty sure anyone who has read the book will know exactly what I'm talking about. You might say it's just one thing but it's a MAJOR thing, one that felt like a complete and utter betrayal based on everything that had happened up until that point and it destroyed me. Actually, I tell a lie because the first time I read it I was so utterly convinced it was one of Kaz's tricks that would end up being resolved over the remaining few chapters that I felt absolutely no fear and had no emotional reaction to it at all. It wasn't until several chapters later when other events confirmed things that it all became horribly real and at that point I had to skip back and start rereading. That was when the tears came and they took a long time to stop. I'm still heartbroken and that one thing has coloured my memories of both books in the duology. I don't think I'll ever want to go back and reread Six of Crows because I'll always know what is coming and that just ruins everything.

I can still picture that spin off but now it doesn't go anywhere I'm interested in following. I just don't see how Leigh Bardugo can make certain things work after that major event that I can't talk about. She could find a way to backtrack on what happened and if she did then I'd probably love her for it but it would also make me feel like the ending of Crooked Kingdom was just a very nasty trick she played on her readers to get an emotional reaction out of them. Admittedly that option is better than if she leaves things as they stand but either way I'm not impressed. Whatever happens I'm going to be wary of her books in the future because she's started to erode the trust I had in her and that's heartbreaking because I've always been a superfan of hers (I have multiple copies of all of her books - even this one!). The first 90% of Crooked Kingdom was a 10 star read but that last 10% makes me want to give it minus figures so I'm really lost about how to rate this book. I guess since Goodreads and Amazon work on 5 stars I'm going to go straight down the middle and call it a 3 but you could say that to get such a strong reaction it deserves much higher, especially considering how much I loved the majority of it. I'm just so sad that it ended like this.

Now let's have a look at the gorgeous new Crooked Kingdom: Collector's Edition published in the UK by Orion Children's Books. I'm still angry about the way this story ended but I absolutely love this new edition with the pretty gold foil on the cover, beautiful endpapers and the amazing character art at the back. Pictures say a thousand words though so don't take my word for it, have a look at these and make your own mind up! 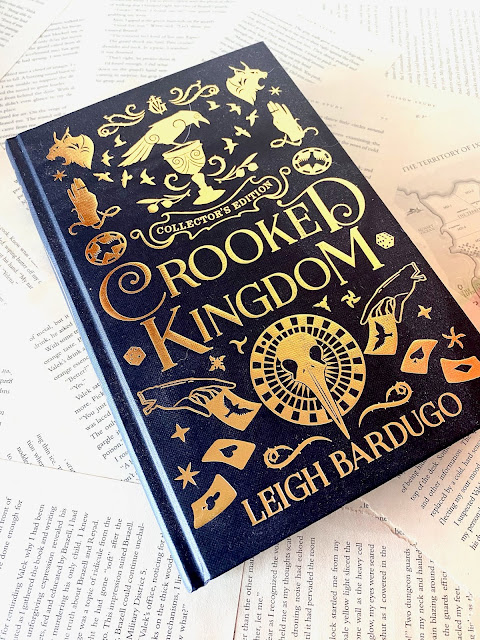 It's hard to get a good pic of foil but hopefully this
shows just how pretty and shiny this book is! 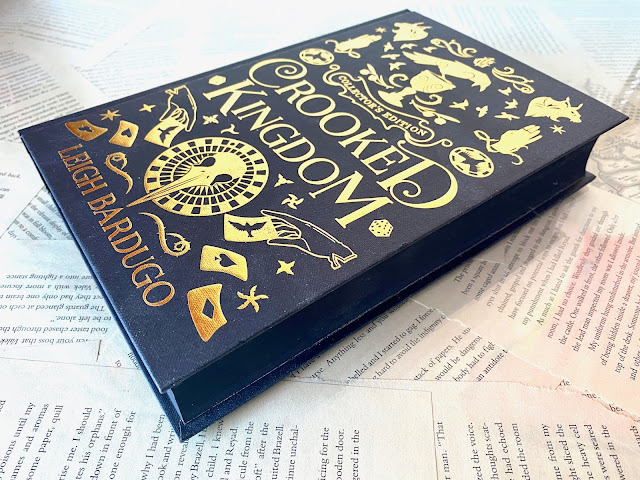 and look at those black sprayed edges! 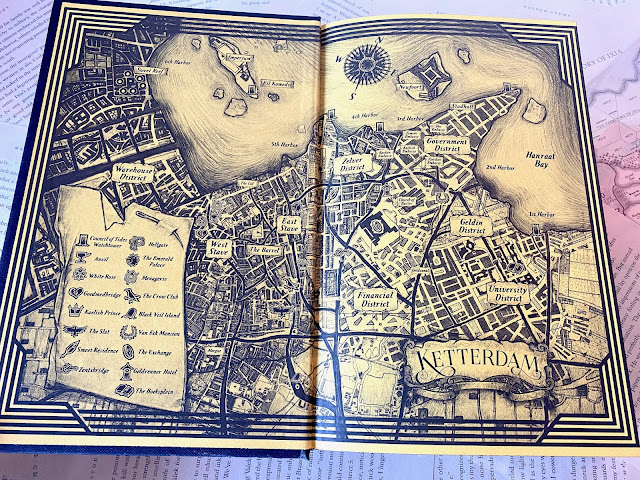 The front endpapers show a gorgeous map of Ketterdam 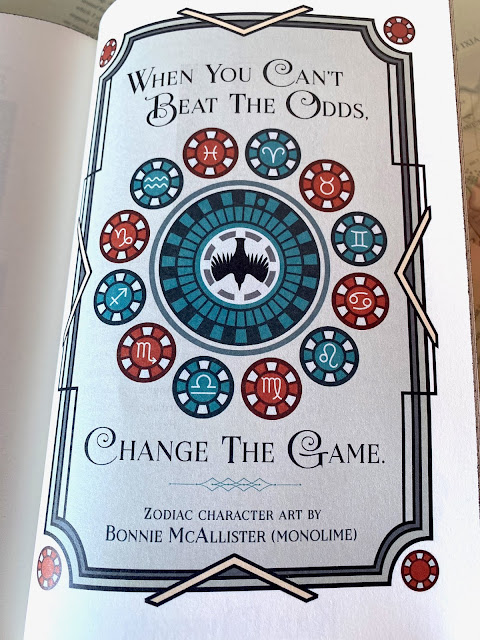 When you can't beat the odds change the game artwork 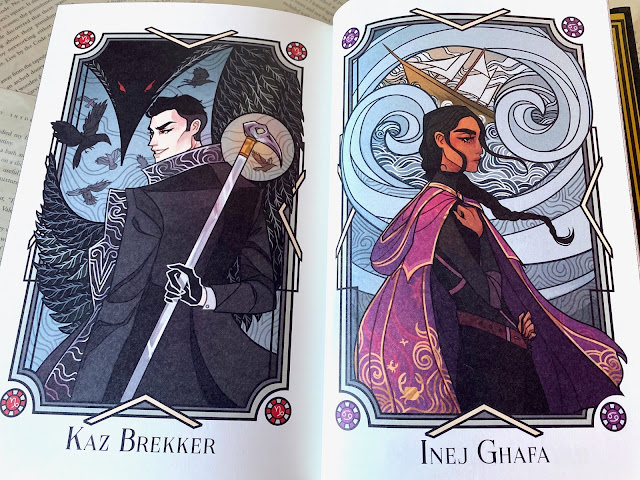 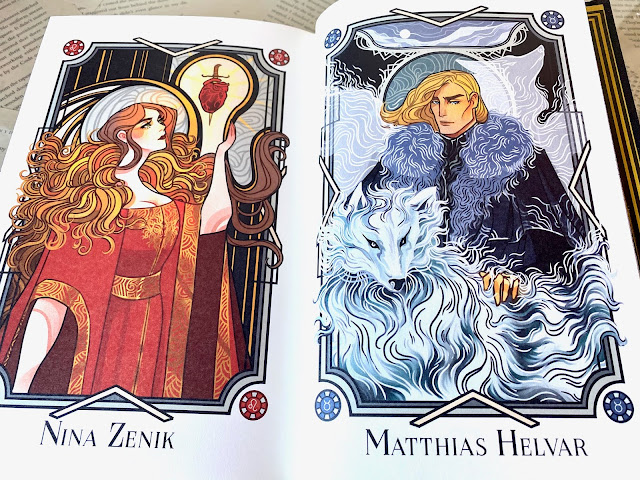 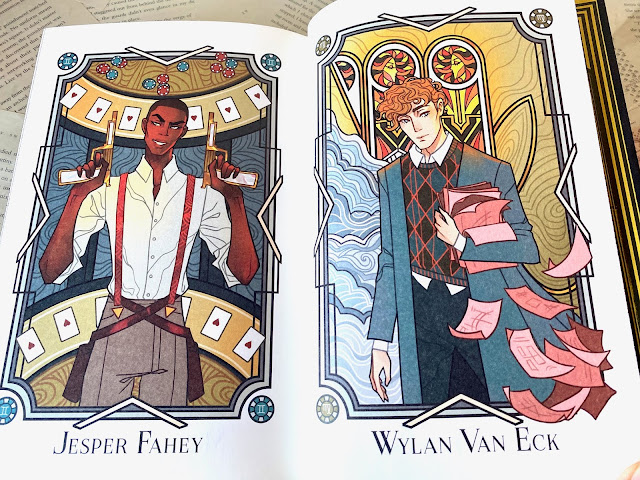 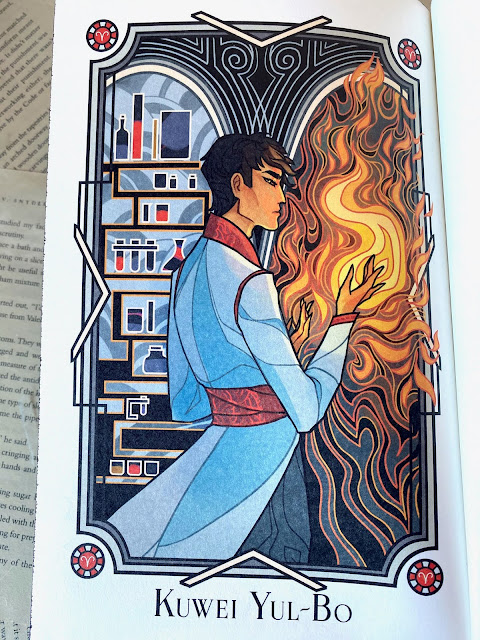 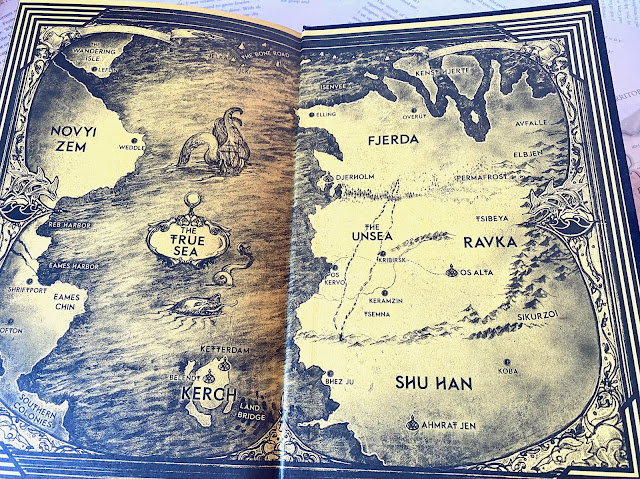 The back end pages show a fab world map 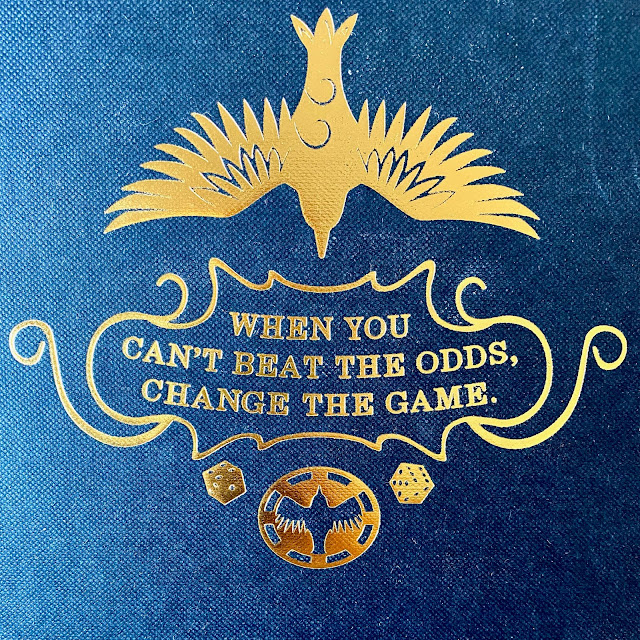 Then even the back cover has this gorgeous gold foil logo

This really is a stunning edition and a great addition to my Grishaverse collection.