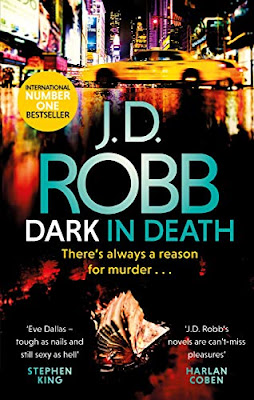 There's always a reason for murder. But when a young actress is killed at a cinema screening, that reason is hard to fathom - even for Lieutenant Eve Dallas and her team. It's only when crime writer Blaine DeLano arrives at the precinct the the shocking truth is revealed. Someone is recreating the brutal murder scenes from her latest series, book by book.


As fiction is transformed into bloody reality, Eve will need all her skill and experience to solve this unique case. Luckily for her, husband Roarke happens to be a fan of DeLano's work. He's more than happy to work side by side with his brilliant wife - no matter how dark things become...

Review:
46 books in and J.D. Robb is still finding creative new motives for murder, in this case real life is imitating art as the killer recreates the murder scenes from a popular author's latest series. Eve is really up against it this time, she is able to profile future targets from the books but that leaves her with a whole city of potential victims and it doesn't give her any clue who the killer could be. It's fair to say that this one will be complicated but Eve will never give up until she catches the bad guy.

I still can't believe quite how hooked I am on this series after already reading so many books. That really does show how brilliant J.D. Robb's writing is and how much I've come to care about these characters. Eve and Roarke's relationship never stops growing and changing as they become more secure in their partnership and learn each other's quirks and hot buttons. Their romance has never been perfect because they both make mistakes regularly but at the same time they have learnt to communicate so those mistakes are quickly forgiven. They really are one of my favourite romance couples because we've spent so much time watching their relationship blossom.

Of course Eve and Roarke steal the show in every instalment but there are so many side characters I also love to catch glimpses of and it's been a lot of fun seeing the direction all of their lives are taking. Peabody and McNab always add some light hearted humour, you have Doctor Mira, her husband and even Feeny who take on a more parental role while Nadine has become a sounding board and a source for useful information. All of the characters feel completely real to me and it's always brilliant to dive back into this world for what feels like the chance to catch up with old friends.