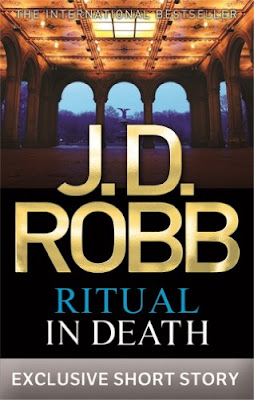 Dragged to a glamorous, high-society ball with billionaire husband Roarke, homicide Lieutenant Eve Dallas is almost relieved when a naked, knife-wielding, blood-drenched man crashes in - a man who thinks he has killed someone.

Tracing bloody footprints, Eve finds a hotel room filled with signs of a ritual murder, but the man remembers nothing. Determined to help, Roarke consults an ex-lover who practices witchcraft. But Eve knows there is nothing supernatural about a deadly lust for power . . .

Set between Salvation in Death and Promises in Death.

Review:
Ritual In Death is a novella available either as an individual ebook, or, as a bind up in print or ebook, that also includes the novella Missing in Death. I read it as part of the bind up but I'm reviewing both stories separately as I'm reading the whole In Death series in order and read these stories weeks apart.

Eve never particularly enjoys the high-society parties she has to attend as Roarke's wife but this one gets much more interesting when a naked man bursts in, covered in blood and raving about a dead woman he might have killed. It isn't hard for Eve and Roarke to follow the bloody footprints back to Suite 606 where they discover a woman brutally murdered in what appears to have been a satanic ritual. It's obvious that there was more than one attacker but is the man from the party one of the killers or another innocent victim?

I think what I love most about the In Death novellas is that they always contain a hint of the supernatural, Eve is always totally out of her depth when we move beyond cold hard logic into slightly weird territories and it's always fun to see her slightly off balance. Roarke is much more willing to accept things he can't see and Peabody is definitely a believer. This particular crime was pretty horrific so I really enjoyed seeing Eve take down the people involved. 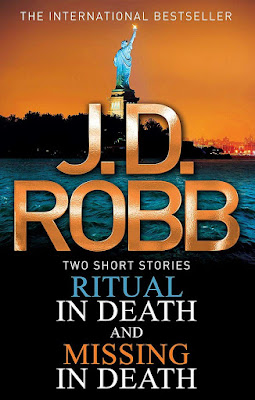 Ritual in Death Kindle Or Bind Up Paperback / Kindle that also includes Missing in Death: