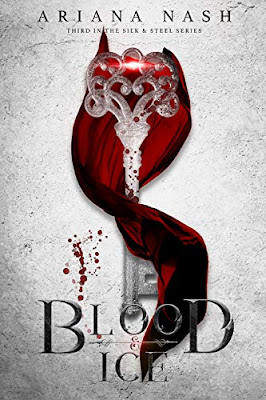 An elven assassin. A dragon prince.
Three days they had together.
Three days was not enough.

There’s a traitor among the elves. A traitor who will stop at nothing to see Eroan pay for the crime of loving a dragon, and Eroan Ilanea will pay with blood.

Lysander has never been free to choose his fate. That is about to change. Finally, he learns what it means to be emerald, but knowledge is power, and power whispers its seductive curse into the ear of a broken prince.

But as the dragonkin rise under a new king, will Eroan's and Lysander's boundless love save the world or destroy it forever?

Silk & Steel is a m/m dark fantasy. The series has triggering content.

Review:
This series has been an emotional rollercoaster from beginning to end. Eroan and Lysander's journey has been far from easy and they've both been tortured along the way but they're still determined to make a better future for their people. Eroan has done everything he can to get the elves to accept Lysander but they're still wary and a further betrayal by one of his own threatens to ruin everything. Lysander was always waiting for things to go horribly wrong so the betrayal doesn't come as such a shock to him but that doesn't make it any more welcome.

In Blood & Ice we get to find out exactly what Lysander is capable of and why the other dragons are so scared of him, we see Eroan make some difficult decisions about the people he's dedicated his entire life to protecting and there's a final showdown between the elves and dragons that ends in a way you probably won't be expecting. The characters we love face dangerous and difficult trials that will change them forever and some characters we hate will get their comeuppance. Nobody is safe in this world, enemies are closing in from all directions and nobody will come out unscathed.

This was a fabulous ending to the trilogy and it left me really excited to read Akiem's spin off book, The Black Prince. I'm very curious to see how much the world will change thanks to revelations at the end of this book.