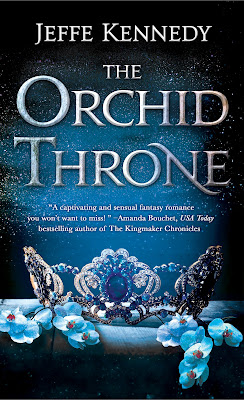 A PRISONER OF FATE

As Queen of the island kingdom of Calanthe, Euthalia will do anything to keep her people free—and her secrets safe—from the mad tyrant who rules the mainland. Guided by a magic ring of her father’s, Lia plays the political game with the cronies the emperor sends to her island. In her heart, she knows that it’s up to her to save herself from her fate as the emperor’s bride. But in her dreams, she sees a man, one with the power to build a better world—a man whose spirit is as strong, and whose passion is as fierce as her own…

A PRINCE AMONG MEN

Conrí, former Crown Prince of Oriel, has built an army to overthrow the emperor. But he needs the fabled Abiding Ring to succeed. The ring that Euthalia holds so dear to her heart. When the two banished rulers meet face to face, neither can deny the flames of rebellion that flicker in their eyes—nor the fires of desire that draw them together. But in this broken world of shattered kingdoms, can they ever really trust each other? Can their fiery alliance defeat the shadows of evil that threaten to engulf their hearts and souls?

Review:
As the queen of the island Calanthe you might think Euthalia is in charge of her own life but she is just as under the tyrant emperor's control as everyone else. Her father agreed to an arranged marriage between them in order to keep Calanthe's independence but it was just another type of chain. Since her father's death Euthalia has done everything in her power to keep the emperor at arm's length and to protect her people but she knows time is running out and soon she will be forced into marriage with a man she despises.

Conri was raised as the crown prince of Oriel but when the emperor invaded his country was destroyed and his people were sent to work in the mines as prisoners of war. Con has been plotting revenge for years, slowly building an army of freed slaves and taking back land from the emperor. According to prophecy if he can gain control of the Abiding Ring he will succeed in his goal to destroy the empire but the magical ring is connected to Euthalia and can't be removed until her death. Both Conri and Euthalia have similar goals but can they trust each other enough to form an alliance? And even if they do will their rebellion have any chance of success?

The Orchid Throne is the first book in Jeffe Kennedy's new fantasy romance series and it does a great job of introducing us to a new world. This is a world where magic is forbidden and those with power have to keep it hidden, a world where to defy the emperor means certain death. It is extremely dangerous for Euthalia and Conri to even discuss rebellion but fate sometimes has a way of forcing your hand and sometimes you have to take the opportunities that come your way.

As the first book in the series this book takes the time to introduce the main characters separately before they are introduced to each other. We get to know them both and see just how their lives have been affected by the tyrant emperor. Their lives are very different but they've both had their own struggles to deal with and are united by the need to protect their people against a common enemy. I love it when you get a slow build romance and that's exactly what happened here, when you're reading a series you don't want everything to happen too quickly or there is nothing to look forward to later on. This had just enough romance to keep me happy and I'm looking forward to seeing more of Euthlia and Con's relationship in future books. I also can't wait to see how they continue their rebellion against the emperor. This was a great start to the series and it's definitely left me ready for more.