I've been hearing fantastic things about Swati Teerdhala's debut novel The Tiger at Midnight and it sounds exactly the kind of book that I love to read but I've had a lot of trouble over the last few years trying to keep up with all of the trilogies that I've started reading. I find that by the time books 2 and 3 release I've forgotten what happened in the first book and I don't have time to reread every series before each new instalment so I'm tending to wait until all of the books are published before I start reading it. I know I miss out on a lot of fantastic books that way though so I've really got to figure out a better option!

Anyway I really wanted to spotlight The Tiger at Midnight because it sounds fantastic and I'm hoping to read it as soon as I get a chance. 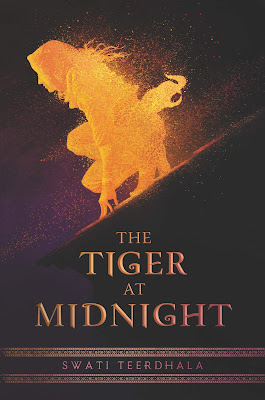 The first book in an epic heart-pounding fantasy trilogy inspired by ancient Indian history and Hindu mythology, perfect for fans of Sabaa Tahir and Renée Ahdieh.

A broken bond. A dying land. A cat-and-mouse game that can only end in bloodshed.

Esha lost everything in the royal coup--and as the legendary rebel known as the Viper, she's made the guilty pay. Now she's been tasked with her most important mission to date: taking down the ruthless General Hotha.

Kunal has been a soldier since childhood. His uncle, the general, has ensured that Kunal never strays from the path--even as a part of Kunal longs to join the outside world, which has only been growing more volatile.

When Esha and Kunal's paths cross one fated night, an impossible chain of events unfolds. Both the Viper and the soldier think they're calling the shots, but they're not the only players moving the pieces.

As the bonds that hold their land in order break down and the sins of the past meet the promise of a new future, both the soldier and the rebel must decide where their loyalties lie: with the lives they've killed to hold on to or with the love that's made them dream of something more.

What do you think? Does this sound like your kind of read? If you've already had the chance to read it I'd love to hear your thoughts so hit me up with a link to your review in the comments :)
at 18:00