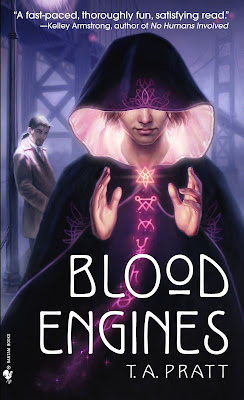 Sorcerer Marla Mason, small-time guardian of the city of Felport, has a big problem. A rival is preparing a powerful spell that could end Marla's life--and, even worse, wreck her city. Marla's only chance of survival is to boost her powers with the Cornerstone, a magical artifact hidden somewhere in San Francisco. But when she arrives there, Marla finds that the quest isn't going to be quite as cut-and-dried as she expected . . . and that some of the people she needs to talk to are dead. It seems that San Francisco's top sorcerers are having troubles of their own--a mysterious assailant has the city's magical community in a panic, and the local talent is being (gruesomely) picked off one by one.

With her partner-in-crime, Rondeau, Marla is soon racing against time through San Francisco's alien streets, dodging poisonous frogs, murderous hummingbirds, cannibals, and a nasty vibe from the local witchery, who suspect that Marla herself may be behind the recent murders. And if Marla doesn't figure out who is killing the city's finest in time, she'll be in danger of becoming a magical statistic herself. . . .

Review:
Marla is the guardian of Felport, the city is her territory and she will do whatever it takes to protect it from danger. She will also defend it ruthlessly from anyone who wants to take it from her which is how she finds herself in her current position. Rather than come at her head on a rival has instead chosen to place a magical curse on Marla and unless she finds a way to counter it quickly it won't only be her city that she looses. She has travelled to San Francisco looking for a magical artefact that she believes could help her break the death spell but it looks like San Francisco is in the middle of a power struggle of its own and now Marla is caught up in an even bigger fight.

Blood Engines was a fun intro to T.A Pratt's Marla Mason series, it does suffer a little with first book info dumping but I'm always willing to forgive that in my fantasy books as long as the characters and story hold my attention and in this case they definitely did. I liked Marla's character, unlike so many other urban fantasy heroines she is already at the top of her game, she knows exactly what she's capable of and she's not afraid to use her abilities to get what she wants. She is also a bit morally grey which makes her much more interesting, she crosses lines to get things done because she's focused on the good of the many rather than the good of the few. Marla knows Felport needs her, she knows her rival wouldn't be capable of protecting the city like she does and therefore she knows that her rival can't be allowed to take control.

I also really liked Marla's partner Rondeau, he's a great sidekick who I think we've only begun to touch the surface of. I definitely want to know more about his background and how he came to be working alongside Marla. Then there's also the seer B who I think has a lot more story to tell too so hopefully he'll be popping up again in future instalments. Either way I'm looking forward to reading about more of Marla's adventures.