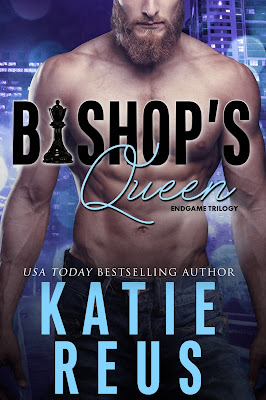 Return to the Endgame trilogy where blood is thick, but passion is thicker…

Review:
Isla and Evan were the perfect couple, very much in love and looking forward to planning their wedding, but that was before Evan was badly injured in an explosion and things quickly spiralled out of control. Not wanting Isla to be stuck with a damaged man and also blaming himself for the death of her father, who was killed in the same explosion, Evan chose to push Isla away. He refused to even see or speak to her and broke her heart at a time when she needed him the most. Isla never wanted to give up on Evan but after weeks of no contact she realises that it's probably time for her to try and move on with her own life. Until she finds herself in danger that is. There's no way that Evan can leave Isla unprotected and the more time they spend together the more he realises what a terrible mistake he made in pushing her away but can he convince her to give him another chance?

We already met both Isla and Evan in the previous book, Bishop's Knight, so I was pleased that we were getting their story next. I kind of wanted to shake some sense into Evan for the way he was treating Isla in the previous book. He was doing that macho thing of trying to protect her by pushing her away but it was obvious that he was just making things even worse for both of them so it was incredibly frustrating to watch. I'm glad we got to see part of the story from his point of view because it made it much easier to forgive him for his stupidity, we get to see just how much he is struggling to deal with both his injuries and the survivors guilt he feels at making it out alive when so many others, including Isla's father, died. Evan made some dumb choices and he did hurt Isla because of that but it was easier to forgive him because we saw exactly what he was going through too.

Luckily it doesn't take him long to realise his mistake either and then he goes all out to win Isla back and to prove that she can trust him again. I could equally understand why Isla was wary of getting her heart broken again, not only did she lose her father in terrible circumstances but at the same time the one person she should have been able to rely on the most walked away and abandoned her too. She tried to hard to get through to Evan in the beginning but he was stubborn to the core and didn't even have the guts to explain things face to face. I found myself really rooting for these two to sort things out and get back together though. They were a great couple and the chemistry between them was palpable, even when they weren't really on speaking terms. I'm glad Isla made Evan work a bit to win her back but I was definitely happy to see them back on the same page.

Bishop's Queen was everything I was looking for, there's a strong romance with great characters plus a hint of danger alongside a mystery that kept me guessing who the bad guys were. I'm really looking forward to the final book in the trilogy where we'll finally get to know the third Bishop sibling better and hopefully see him clear his name.