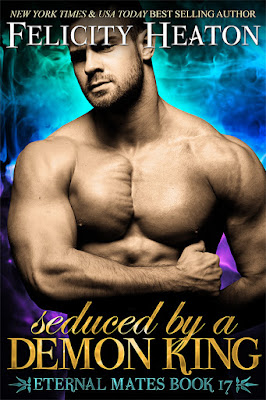 Saddled with a crown he never wanted, King Tegan of the Second Realm of demons is a warrior born for war stuck ruling in a time of peace, bound by the pact that cost his brother his life. Chafed by the ties that have held him shackled to his throne for the last thousand years, Tegan plans an escape from his prison—one stolen night meant to give him a taste of freedom, but one that will lead him to the greatest battle of his life.

A fight to claim the heart of a bewitching fae female who might be his fated mate.

According to many in her clan, and the idiotic incubi who infest the fae town where she lives, Suki puts the suck in succubus. Down on her luck, and in danger of being kicked out of the family she loves, she’s determined to prove her worth by bagging and tagging a powerful male. When she sets eyes on a mysterious, panty-melting demon warrior in a nightclub, things finally seem to be going her way, but his shadowed aura and guardedness warns he won’t be an easy mark.

Seducing him is going to be the fight of her life.

When the battle is done, will the victor have the forever they want, or will this war cost them both everything?

Review:
Tegan never wanted to be king of the Second Realm but when his brother was murdered just after negotiating a peace treaty he was next in line for the throne. Tegan wanted nothing more than to go to war with the demons who arranged for his brother's death but he also wanted to honour the treaty that his brother was so proud of. The crown has been a heavy burden for the last thousand years and he just wants a little freedom from his duty when he sneaks into the human world for a few hours of fun.

Suki may be a succubus but she's never felt fully a part of her clan. Her powers aren't as reliable as they should be and she's not very good at seduction so she would have starved long before now if her sisters hadn't shared their power with her. Suki feels she has one last chance to prove herself to the rest of the clan and she's worried that if she fails she will be kicked out and left to fend for herself. Determined to seduce a man powerful enough to give energy to the whole clan she targets Tegan in a bar but the more time she spends with him the less she wants to use him for a quick hit of energy.

Seduced by a Demon King is the 17th book in Felicity Heaton's Eternal Mates series and was probably my favourite of the most recent stories. Considering it's a book about a succubus and a demon I wasn't expecting the slow build romance that we got here and I loved how sweet and almost innocent the beginning of Suki and Tegan's courtship was. Don't get me wrong there was still plenty of chemistry between them but they didn't rush headlong into a sexual relationship because Suki was afraid of hurting Tegan. At the same time Tegan was pretty sure that Suki was his eternal mate and he didn't want to scare her off by coming on too strong so they spent time getting to know each other.

These two were just really cute together, especially with Tegan being so naive of human customs and technology as he's not been in our realm for such a long time. He's quite a geek though and loved learning about new things that he could take back to his own realm to make life better for his people, Tegan is definitely a king who cares for his people. Suki had very little confidence in herself or her own abilities so it was nice to see her realise that she was far more capable than anyone gave her credit for. This was a really enjoyable romance that has helped rekindle my excitement for this series.