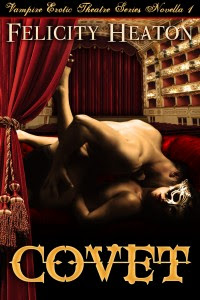 They’ve burned for each other for two years, the forbidden attraction between them growing each night. Now resisting the sinful desires of their hearts is becoming impossible.

Javier knows better than to succumb to his hunger for Lilah. The mortal female belongs to a powerful aristocrat patron of Vampirerotique, the theatre he runs with three other vampires. A single touch is all it would take to break the sacred law of his kind, sentencing himself to death, but his passion for her has become too fierce to ignore and he will risk everything to make Lilah his.

Lilah has fought her desire for Javier since arriving at his theatre as a servant but each glance he has stolen, his eyes promising pleasure that will satisfy her longing for him, has chipped away at her defences and she can no longer deny her need and her forbidden feelings for the powerful vampire male.

I'm a massive fan of Felicity Heaton's books so as soon as I heard about her new series I knew I wanted to read it. I loved the idea of an erotic theatre that hosts performances aimed at teasing aristocratic vampires and the atmosphere is perfectly described in the story. As a novella the story is a quick read but it still has the depth to the characters that I've come to expect from this author, the pace works well and the romance between Javier and Lilah is incredibly steamy. Add in a bit of voyeurism as they watch the performers on stage from the private box they find themselves in and you'll certainly find your temperature rises while reading this one!

I can't wait to read the rest of the series but I'm particularly excited about Snow's book - I just have a feeling he is going to end up a favourite! If you like your paranormal romance dirty then this series is perfect - especially if you're looking for something that you can read in one sitting. I'd highly recommend giving it a try!