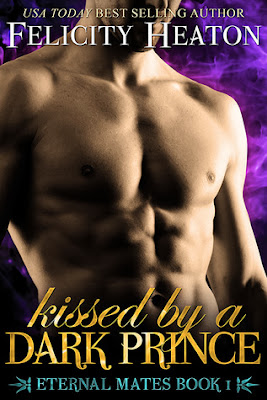 Olivia thinks it’s her lucky night when a dangerously handsome unconscious fae ends up on her inspection table. He’s her chance to redeem herself with her employer, the demon-hunting organisation, Archangel. But when the tall, dark and deadly immortal warrior awakes, she gets much more than she bargained for . . .

Attacked by his enemy in the elf kingdom, the last thing Prince Loren expects when he comes around is a beautiful angel watching over him and medical technology of the mortal realm. Hazy from his injuries, all he can focus on is the pulse ticking in her throat and the sweet allure of her blood.

One single bite reveals she is his eternal mate, triggering a bond between them that will leave him weakened until it is complete… or broken, and pulling Olivia into the crossfire of his ancient feud.

To protect his people and his mate from the machinations of a madman, Loren must risk everything by working with Olivia at Archangel to find a way to break the bond blossoming between them.

But will Loren be strong enough to place duty before desire and give up the one thing he has waited millennia for and craves above all others—his eternal mate? And will Olivia be able to resist the incredible heat that burns between them and the temptation of her dark prince’s kiss?

Review:
I can always rely on Felicity Heaton when I'm looking for a hot paranormal romance with engaging characters and she has outdone herself with Kissed by a Dark Prince. This is the first book in her new Eternal Mates series and I'm already looking forward to getting my hands on the next book. Although this is set in the same world as her Vampire Erotic Theatre series there is currently no crossover of characters (I believe previous characters will make an appearance in the 2nd book Claimed by a Demon King though) so this can easily be read as a stand alone story.

While the VET series focuses mainly on the vampires living in the Vampirerotique theatre and their mates Kissed by a Dark Prince allows us to explore the wider world of the elves, fae and demons. It turns out that the elves are the forefathers of the vampires, the race withdrew from the human world to one of the demon dimensions when some of their members started turning dark, eventually evolving into vampires. Loren is prince of the elves and he has been at war with his brother Vain for centuries doing whatever it takes to protect his people from Vain's evil schemes. He had given up hope of finding his eternal mate but after being badly hurt and left for dead he bites Olivia, needing blood to heal his injuries, and accidentally activates the bond between them. As much as he has longed to find her for centuries he knows that Vain will use his mate against him and he doesn't want to put Olivia in harms way so feels his only option is to find a way to break their bond.

I loved Loren, he's everything you want from a hero - strong, commanding and sexy he is an alpha male who knows what he wants but thankfully he doesn't have to behave like an ass to get it. He well respected by his people and protective of them and of Olivia. One of the things I really liked about him was how he tries so hard to do right by Olivia, he goes out of his way to make sure she is comfortable and puts himself in danger so that she can remain in familiar surroundings where she feels safe. Even when he starts to develop feelings for her and wants them to complete their bond he never pressures her because he wants her to make the decision freely. That doesn't mean he won't use all the skills he has at his disposal to show her how good it could be between them though! Olivia is another character I found easy to like, she is a scientist so has a natural curiosity about Loren and the elves which makes her want to learn more about them and the dimension they have made home. I was pleased to see her making sensible choices and that she was willing to own up to her mistakes rather than automatically blaming everything on Loren.

Alongside the main couple we have been introduced to some interesting side characters that I'm looking forward to getting to know better. I have a feeling Oliva's friend Sable might be the heroine of book 2 and that things are about to get very interesting for her. She works for the demon-hunting organisation Archangel but her role is much more hands on than Olivia research background so it'll be interesting to get to see another side to them too. I loved Loren's second in command Bleu so hope we'll get to see more of him as the series continues and there is one particular male that I'm already dying to get to know better but I can't tell you his name without giving a spoiler. Kissed by a Dark Prince is a fantastic start to this new series and Claimed by a Demon King is already at the top of my wish list even though there is currently no release date and we don't even have confirmation of who the main couple will be!